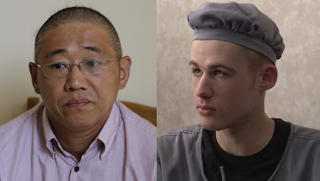 North Korea released U.S. citizens Kenneth Bae and Matthew Miller from captivity over the weekend, once again using American detainees as bargaining chips to directly deal with Washington while at the same time shutting out Seoul.

According to U.S. media reports, an airplane carrying Bae and Miller arrived at Joint Base Lewis-McChord, in Washington State, on Saturday night local time.

James Clapper, the director of national intelligence, accompanied the two detainees after having reportedly flown to Pyongyang on a secret mission.

Bae was arrested in November 2012 and sentenced to 15 year of hard labor on charges that the North said were hostile acts against the state.

Miller was arrested in April 2014 after entering the country and, according to some reports, tearing up his visa and demanding asylum.

Experts said Pyongyang appeared to have determined that now was the best time to use the American captives as bargaining tools, employing a decades-old diplomatic strategy that leaves the South in a frustrating position when it comes to handling tense relations on the Peninsula.

“The international community has intensified pressure on North Korea over the country’s human rights abuses, as the Republican Party won the U.S. midterm elections and regained control of the Senate,” said Bong Young-shik, a senior research fellow at the Asan Institute for Policy Studies. “The Kim Jong-un regime probably thought that now is the time to serve its strategic interests.”

President Barack Obama’s decision to send Clapper appears to have played a role in inducing Pyongyang’s release of both detainees. The North demanded that a top-level envoy be sent to discuss the release.

Clapper, who oversees more than a dozen U.S. intelligence agencies, is the highest incumbent official in Washington to visit the reclusive nation.

Quoting an unnamed senior State Department official, CNN reported that Clapper delivered a letter from Obama, addressed to the North Korean leader, which described Clapper as “his personal envoy” to bring the American detainees home.

Clapper did not meet with Kim, the report added.

While the North has recently engaged in talks with Japan and the United States, it has thrown a cold shoulder toward South Korea’s efforts to resume dialogue.

Last month, a group of Japanese government delegates visited Pyongyang and discussed the North’s abduction of Japanese citizens from 1977 to 1983.

And when a top-level delegation from the North made a surprise visit to the South on Oct. 4, expectations quickly grew that the frozen inter-Korean ties could see a thaw.

At the time, the two Koreas agreed to have high-level government contact in late October or early November.

But the North continued to escalate tensions at the land and maritime borders, exchanging gunfire with the South, and repeatedly complained about the launches by South Korean civic groups of balloons carrying leaflets critical of the regime, leading to the plan for high-level talks to fall through. Early yesterday morning, the Ministry of Foreign Affairs told reporters that Seoul was not completely isolated while Pyongyang and Washington were arranging the release. The government was thoroughly briefed by the United States about the development, it said.

Ministry spokesman Noh Kwang-il issued a statement and welcomed the release of the Americans. “Seoul and Washington consulted about the American detainees’ release through the U.S. Embassy in Korea and the United States will debrief us in a few days,” a Foreign Ministry official said. “It was a humanitarian mission, and U.S. policy toward North Korea will remain unchanged.”

Foreign Ministry officials said that sending the director of national intelligence as a special envoy ? and not a State Department official ? was intended to send the North a signal warning against hasty optimism.