Vendors fight to stay in Gangnam

Vendors fight to stay in Gangnam 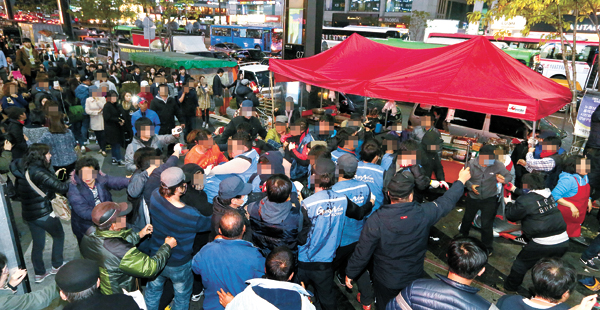 Contract workers hired by the Gangnam District Office scuffle with street vendors on Tuesday near Gangnam Station in southern Seoul. By Choi Seung-sik


Street vendors near Gangnam Station, southern Seoul, found themselves involved in an unexpected brawl on Tuesday with about 30 contract employees from the Gangnam District Office.

When the temporary workers confiscated some of the merchants’ street stalls and placed them in the back of their truck, others came out onto the road ready to take them back at all costs.

“Hey, push them away! Take the cart!” one of the contract workers shouted.

But more than 50 street venders scrambled to stop them by forming a barrier or throwing food at the district hires. The scene surprised passersby, and a few grabbed for their cameras or phones to document the skirmish. 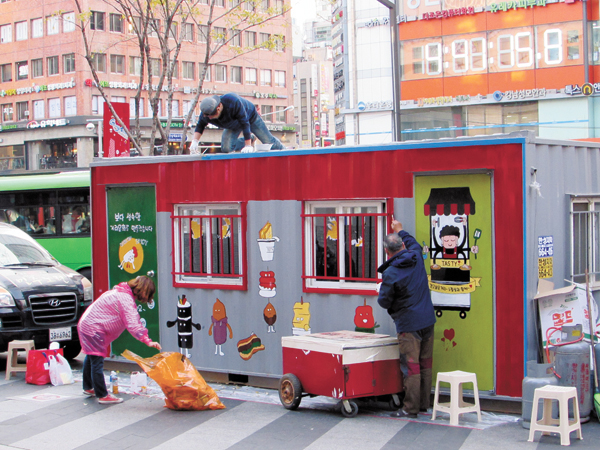 Members of the Korea Street Vendors Confederation (KSVC) paint a shipping container on Wednesday that they brought earlier to continue their sit-in demonstrations. By Kim Bong-moon

But the melee is only the latest in a prolonged dispute between the district office and the Gangnam vendors, who insist that city authorities are threatening their livelihoods. The district, on the other hand, argues that the selling goods on street is clearly against law and that such activities only inconvenience pedestrians on the sidewalk and add to congestion.

The conflict has intensified in recent months as street vendors have set up tents and conducted sit-in demonstrations to protest to the district office’s crackdown.

Gangnam District Office officials have torn down the tents several times, which prompted the Korea Street Vendors Confederation (KSVC) to step in to protect its members.

Earlier this month, the street vendors went so far as to bring a shipping container, rather than tents, to the middle of Gangnam Boulevard. When the district office tried to confiscate it, dozens of merchants stepped in to try to stop them.

But though the vendors claim their jobs are being jeopardized, the district office alleges that most of the stalls near Gangnam Station aren’t owned by people who depend on the business. Rather, they are run like enterprises, they say.

“They are not for their livelihoods, but for profit. Some street vendors own multiple stalls in the area or their relatives have multiple street stalls in the same area,” said Jeong Han-ho, the head of the Safety and Construction Department in the Gangnam District Office. “We moved all the street vendors to the inside of the block back in 2008, but they edged back out to the boulevard in 2011 and shop owners have complained about it.

“We estimate that they are earning about 10 million ($9,156) won a month because they only accept cash and don’t pay rent or taxes,” he added.

The Gangnam District Office ultimately aims to clear the street by eradicating enterprising street merchants and relocating those who depend on the business to areas where they would elicit fewer complaints.

The street stalls confiscated from Gangnam Boulevard by district officials are discarded because the area is designated as a special maintenance area, while the ones taken from other locations are returned to their owners, who are then fined.

The KSVC, however, insists that the district office is exaggerating the situation.

“We are demanding the Gangnam District Office allow at least 25 street stalls along the boulevard,” said Choi Oh-su, a public relations official with KSVC. “It’s true that some of the street vendors rent out their stalls, but only when the owner can’t keep it due to health reasons.”

There are currently about 30 street vendors alongside the road, and they have no intention of giving up their spot in an area with the country’s biggest floating population.

Gangnam became the most famous tourist attraction in Seoul after Psy’s hit “Gangnam Style” went viral worldwide in 2012, and with the influx of tourists, many street merchants have put up menus or signs in English, Chinese and Japanese.

According to the Gangnam District Office, more than 5 million foreigners visit Gangnam annually.

The vendors have also complained that the Gangnam District Office has cracked down too hard lately as other district offices have sought out ways for street merchants and shops to coexist - an argument that reflects data from the Seoul Metropolitan Government.

According to those figures, as of June this year, there were 2,925 documented cases in which illegal street vendors were apprehended by authorities in Seoul.

Gangnam District accounted for 541 of those - the second most after Seocho District, on the other side of Gangnam-daero, which accounted for 761 of all cases.

But not all street vendors are in line with KSVC’s push against the district office, and some merchants in the area, especially those who don’t operate along the boulevard, have admitted that they feel uncomfortable as the conflict grows.

Even though they aren’t directly related to the dispute, they’ve been advised to attend the protests.

“I had to go to the protest last night and it ended this morning,” one street vendor, who asked for anonymity, told the Korea JoongAng Daily. “The crackdown may threaten our lives and it’s uncomfortable when confederation members recommend I attend those meetings when I’m running my stall here behind the main street.”

“It is impossible to run street stalls here without registering with the confederation,” another merchant added, “because individual sellers can’t resist the crackdown, and confederation members often persuade them to register. Except for one street vendor who’s been here for a long time, all the vendors here have registered with the confederation.”

But it appears the public mostly supports the district office, which stated that it continues to receive complaints not just from shop owners in the area, but passersby as well who feel inconvenienced.

“When I passed by a protest by the street vendors, I heard an official from the confederation telling members to pretend they had been beaten by district office contract workers,” said a 67-year-old who asked for anonymity.

“They should be gone from the road because they only disturb people; they illegally park their cars along the road, hang illegal banners, leave garbage, pour waste water in the drains and they damage the pavement when they nail down their tents.”

The KSVC has also tried to draw a support base, mostly by appealing to public emotions.

Its members recently hung a banner, on which people could write supportive messages, next to the shipping container. They’ve also painted the container box to make it appear friendlier to passersby - a clear signal that they have no intention of stepping down.

Yet, experts say that an easy way to solve the problem would be to establish a new registration system for street vendors.

“Defining street stalls as illegal and cracking down on them from time to time is only rousing the antipathy of street vendors,” said Cho Myung-rae, a professor of urban and regional planning at Dankook University.

“It would be more effective if local authorities managed merchants by implementing regulations for operating hours, the area and their products.”