The year 2014 should be unforgettable for rising actor Ahn Jae-hyun.

The actor, who debuted through SBS megahit drama “My Love From The Star” as the younger brother of lead actress Jeon Ji-hyun’s character, quickly became a heartthrob for teenage girls. The 27-year-old has now advanced to the silver screen as high school sweetheart Won-ho in webtoon-based film “Fashion King,” which opened at local cinemas on Thursday.

“I still have a long way to go for the people who believe in me,” Ahn said humbly.

Ahn talked about his short but sweet career and his expectations for the future during an interview with the Ilgan Sports, an affiliate of the Korea JoongAng Daily. 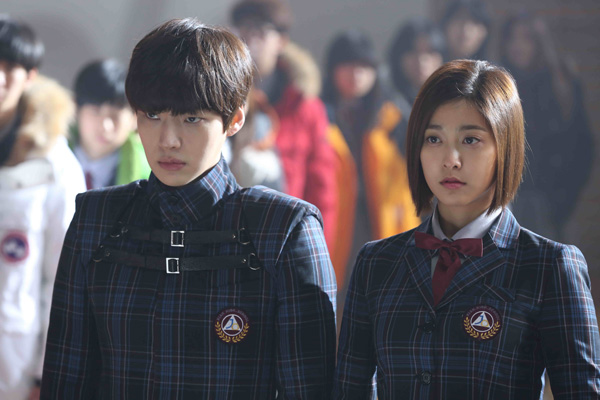 In “Fashion King,” Ahn plays Won-ho, left, the most stylish boy in school. Provided by the distributor

Q. Your previous characters in the drama “My Love” and the most recent movie “Fashion King” have prickly personalities. Do they resemble you?

A. I’m an easygoing person, but I often hear people saying that I seem arrogant on first impression. I guess that’s part of my character, but one thing that’s for sure is that once I become friends with someone, I’m far from haughty.

Do you have any regrets about becoming an actor?

Never. I think the occupation constantly pushes me to live my life with more passion and more competitiveness. If someone asks me to be part of a production, it means that I am qualified enough to play the character. The job itself is the driving engine of my life.

Are there any colleagues who motivate you to work harder or help you when you are struggling?

In previous works, I had many colleagues who were in my age range, so they were my biggest motivators and also role models. In “My Love From The Star,” actor Kim Soo-hyun was one and in “Fashion King,” it was Joo Won who showed great talent in acting.

What are your thoughts about people calling you a “model turned actor”?

I like that label because it is a way of showing people that I lived my younger days in a diligent way. It’s like a name card that explains my past. What matters is showing what I can do better in the future, not the past.

Is that optimism part of your personality?

I believe that happiness comes when you think that you are happy. Even if something bad happens I try to think that it’s not so bad.

How do you relieve your stress?

I read books. I realized that nothing changes when I show my anger on the outside. In contrary, if I read books in silence slowly, I can feel my anger subsiding.

Do you have any character you want to play in the future?

First of all, I want to play a role that is totally different from my previous ones. For instance, I want to play an out-and-out libertine or someone who is missing a screw or two (laughs).