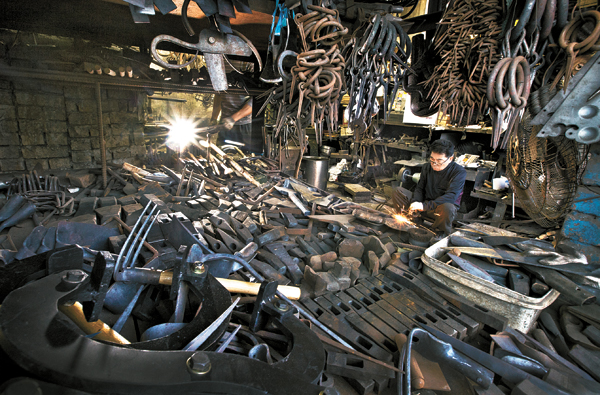 Ryu Sang-jun works at his blacksmith shop, which is filled with farming tools and machinery.

“At the age of 12, when I graduated from elementary school, I started to play with steel,” Ryu Sang-jun, a 61-year-old blacksmith, reminisced while standing in front of a brazier.

“During that time my father was making horseshoes and my neighbor was a blacksmith at Moraenae. The hammering at the smithy grabbed my attention, so I begged the workers there to give me a chance to learn the job. My first task was blowing the bellows, but I was beaten for not being good enough.”

Ryu has spent 50 years as a blacksmith. He has his own small shop near Susaek Station in northwestern Seoul called Brother Smithy, a reference to the fact that he opened it with his younger sibling, who he still works with. He has a solid reputation in the trade and has many regular customers. 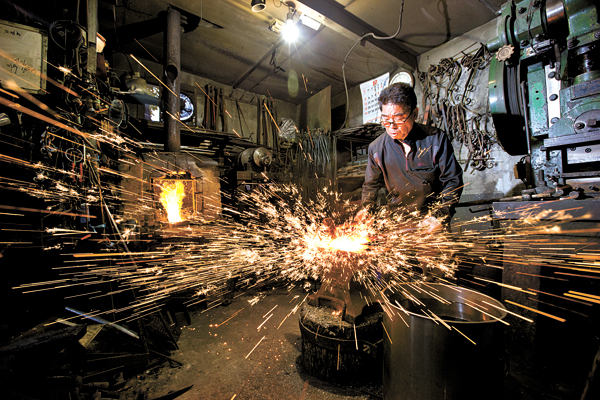 Ryu Sang-jun, a blacksmith with more than 50 years’ experience, toils away at his shop.

A hard worker, Ryu grabs his hammer every single morning and consistently aims at perfection.

When he forges metal, he feels that he must do it well, no matter how long it takes. And because he puts so much effort into his work, every person who comes to his shop becomes a faithful client.

In the past, Ryu used to make farming tools, so his store is still filled with different agricultural contraptions: hoes, pitchforks, pickaxes, scythes, knives, axes and claw hammers. 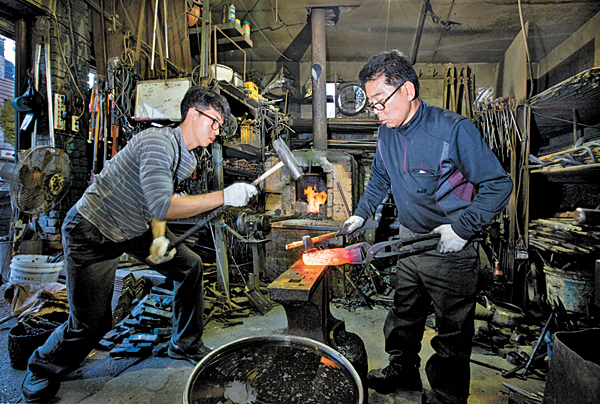 The number of people looking to buy farming equipment is lessening, though.

But even though the demand for agricultural machinery has declined, Ryu and his team now keep busy by making equipment for construction sites instead.

Most notably, the shop and its staff once made more than 2,000 items that were used to build the Kaeseong Industrial Complex, the factory jointly run by North and South Korea.

As well as this business, many people who live in urban areas still visit the smithy for tools to cultivate the plots of land they manage on weekends.

There is also a high demand from broadcasting stations that need props for historical dramas. The Ryu brothers have made props for “Jewel in Palace,” “Seodongyo,” “Yeon Gaesomun” and “Taewang Sasingi.”

Nevertheless, not all blacksmiths are as popular as Brother Smithy. The number of orders in the industry has reduced because of the cheap price of farming tools from China. 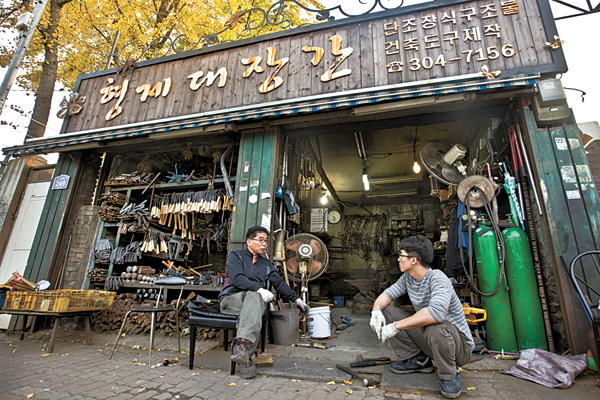 Smithies who pursue traditional methods of forging equipment lost their foothold in the market quite some time ago.

As a result of this, Ryu stresses the needs for competitiveness and skill development in order to survive in the market. Even Ryu, who has half a century of experience, still says there is room for him to improve. This is why he is always hammering away, night and day.

The brothers said being a blacksmith is not a special vocation, but they appreciate that they have been able to support their family through their work. Although toiling away makes them weary, the two stress that they will continue to work as blacksmiths until the day they die.

Brother Smithy has received a fresh lease of life recently because it took on Lee Kyung-ji, an apprentice. Lee was introduced to the blacksmith’s store while watching a TV show profiling it during his middle-school years.

He applied to work at the smithy right after he graduated high school in order to fulfill a dream. The brothers are teaching Lee the tools of the trade.

The Ryu brothers’ pride in keeping the traditional blacksmith’s culture alive heats up the shop’s atmosphere as much as the fire in the brazier they regularly set alight.