Abreu and deGrom MLB’s rookies of the year

Abreu and deGrom MLB’s rookies of the year 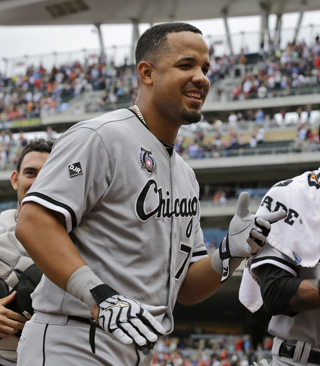 “I don’t have any words to describe this moment,’’ Abreu said through a translator on an MLB Network telecast. “I consider myself a good hitter, and I guess I’ve proven it.’’

One year after defecting from Cuba, the 27-year-old Abreu led the major leagues with a .581 slugging percentage. He was sixth in batting at .317, tied for fourth in home runs with 36 and fifth in RBIs with 107.

Abreu received all 30 first-place votes for 150 points in balloting by the Baseball Writers’ Association of America.

Los Angeles Angels right-hander Matt Shoemaker was second with 40 points, followed by New York Yankees reliever Dellin Betances (27), Houston pitcher Collin McHugh (21) and Yankees pitcher Masahiro Tanaka (16), who was hurt for most of the second half of the season.

Abreu hit .383 with three homers and nine RBIs for Cuba at last year’s World Baseball Classic, then defected that summer and signed a $68 million, six-year contract with the White Sox in October.

He became the first qualifying rookie to lead the major leagues in slugging percentage since Oakland’s Mark McGwire in 1987, according to Stats.

With his shoulder-length hair flapping out from under his cap, deGrom was a hit right from the start of his major league career.

He made his debut against the Yankees on May 15, a month before his 26th birthday, and his third-inning single ended an 0-for-64 start to the season at the plate for New York’s pitchers, the worst slide to open a season in major league history.

“Even coming into this year, I didn’t know what to expect,’’ said deGrom, who started the season in Triple-A. “It all worked out.’’

On Aug. 2, deGrom took a no-hit bid into the seventh inning against San Francisco before Pablo Sandoval’s two-out double. He achieved another bit of notoriety against the Marlins on Sept. 15, striking Miami’s first eight batters to tie the record for whiffs at the start of a game. DeGrom joined Houston’s Jim Deshaies in 1986 as the only pitchers to do it since 1900.