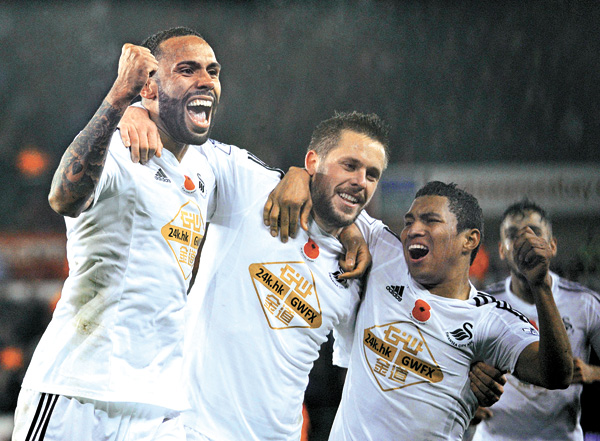 Arsenal and Tottenham both slumped to 2-1 losses in the Premier League as their weaknesses were ruthlessly exposed on Sunday, while Newcastle’s resurgence continued with a fourth straight win.

After squandering a three-goal cushion midweek in the Champions League, Arsenal again failed to hold onto a lead by conceding twice in less than three minutes at Swansea to drop out of the top four.

“It’s difficult to explain how we lost the lead. We were in control,’’ said Arsenal Manager Arsene Wenger, whose team is 12 points behind leader Chelsea and has yet to register a win against a side outside the bottom seven.

Chile forward Alexis Sanchez scored for the fourth straight league game to give Arsenal a 63rd-minute lead, only for Gylfi Sigurdsson to equalize with a stunning free kick and Bafetimbi Gomis to grab the winner barely 90 seconds after coming on as a substitute.

Spurs suffered another hangover after their Europa League commitments, losing at home to Stoke to fall to 12th in the standings and increase the scrutiny of new Manager Mauricio Pochettino.

“We need to improve quickly because you never have a long time in football,’’ Pochettino said. “My challenge in the next few weeks is to change the mentality.’’

That is something Alan Pardew has managed at Newcastle, which was without a win until Oct. 18 but has surged up to eighth in the table.

Young Spanish striker Ayoze Perez scored for a third straight game to set Newcastle on its way to a 2-0 win at West Brom. Argentine defender Fabricio Coloccino headed in the second goal.

Pardew thanked Newcastle owner Mike Ashley for keeping faith in the dark times, saying: “Everyone was pulling at him when we weren’t winning and he stuck with me and was very supportive, especially after the Southampton game [a 4-0 defeat].

“You have to have that as a manager. It bought me just enough time.’’

Everton drew 1-1 at Sunderland and is in 10th place, tied on 14 points with Merseyside rival Liverpool and Tottenham, to demonstrate the competitive nature of this season’s Premier League.

Southampton, West Ham and Swansea are three of the top five after 11 rounds. Chelsea holds a four-point lead and is unbeaten.

Arsenal has been robbed of key French defenders Laurent Koscielny and Mathieu Debuchy in recent weeks and its back four is looking brittle, with Nacho Monreal outjumped by Gomis for the winner at Liberty Stadium.

Little could be done about Sigurdsson’s strike, with the Iceland midfielder curling a shot home from 30 meters to maintain his brilliant form since returning to Swansea this season. He has two goals and seven assists, and is the main reason why Swansea is fifth in the league.

Sanchez is Arsenal’s driving force this season and he swept home a cross from Danny Welbeck following a rapid counterattack for a sixth goal in his last four games in all competitions.

“We have potential,’’ Arsenal defender Per Mertesacker said, “but unless we play that serious football, any team will punish us.’’

Spurs appear to be going backward under Pochettino, whose team is lacking direction, defensive co-ordination and the ability to back up Europa League games on Thursday with Premier League games on Sunday.

Tottenham has now lost four home games this campaign - all of them coming immediately after the Europa League. AP