A series of old cylindrical machines were on display last month at the headquarters of Vaillant Group, the world’s leading boiler manufacturer based in Germany.

Company officials said they were prototypes of steam boilers developed soon after the company was established in 1874. Those prototypes were later redeveloped into new models that are currently sold in 60 countries.

Vaillant may not be a household name, but it is a strong company not only in the heating apparatus business but also in energy solutions and air-conditioning.

“The key to our success was knowledge earned in an area we think we know best,” said Klaus Jesse, the company’s marketing director. “We try to innovate within the organization through continuous research and development.” 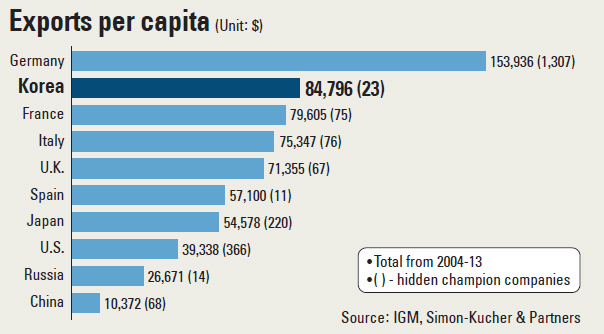 Producing stationery kits, including pencils and notebooks, is the type of business many Korean companies avoid, but it is an important one that boosted the local economy in Nuremberg. Faber-Castell has been producing pencils for 250 years and sells about two billion a year worldwide. Artist Vincent van Gogh, writer Herman Hesse and poet Johann Wolfgang von Goethe were fans of Faber-Castell.

The company has set the standard for pencils, including the graphite grading scale HB, in which H stands for hardness and B for blackness, and it introduced hexagonal pencils. The company even grows its own trees to improve product quality.

These companies, along with Tetra, the world’s leading maker of fish feed, and Jungbunzlauer, a top producer of biodegradable ingredients of natural origin such as citric acid for cola, make Germans proud. They are all leaders in their fields.

According to the Institute of Global Management (IGM) in Seoul, there are 2,734 hidden champions in the world and 1,307 of them are in Germany. The JoongAng Ilbo toured their facilities with the IGM and about 10 CEOs from small and midsize Korean companies.

IGM said focusing on one sector typically is not a good business model, because the potential growth rate isn’t high and there can be serious consequences when the local economy goes bad or a new technology is introduced.

But these hidden champions were able to avoid such problems by expanding sales to the global market early on. More than 62 percent of their revenue is from exports, IGM said.

Until the early 1970s, Karcher produced a wide variety of products from toys to watercraft parts, but as competition got tougher, the company concentrated on producing high-pressure vacuum cleaners that require high-end technology.

With a reduced product line, Karcher’s revenue declined, but the company compensated by tapping markets outside of Germany. Since 1975, the company has made it a practice to enter a new market every year, and it now has 100-plus branches in more than 60 countries.

Glasbau Hahn sells glass for display cases at museums and art galleries, including the Louvre in Paris and the Leeum, Samsung Museum of Art in Seoul. About 80 percent of its revenue is from exports, thanks to its world-best anti-dust technique.

“Looking into these hidden champions, they have the best products in their business and are globalized in terms of management,” said Bae Bo-kyung, an IGM spokesman.

“Their business strategies are very different from major Korean conglomerates in that they don’t hesitate to extend their business fields.”

These companies also maintain a good relationship with people in the regions where they are located. By providing quality jobs to local residents, they are valued employers that boost local economies.

Conglomerates in Korea tend to hire graduates from the nation’s top universities, but more than 80 percent of workers in these hidden champions didn’t go to college. Instead, they participated in job training programs to learn techniques from master craftsmen.

Hidden champions have 31 technical patents per 1,000 workers, compared to six at conglomerates, according to Simon-Kucher & Partners.

Most hidden-champion workers are happy with their jobs. They understand their role in the group and its importance. The companies pay their workers based on performance. The turnover rate for Germany’s hidden champions is only 2.7 percent, compared to Germany’s average of 7.3 percent.

“Workers at hidden champions tend to stay with their company until their career is over,” said Simon.

“It means that workers there try to develop a goal and vision with the company. As long as they work together, companies respect their workers.”