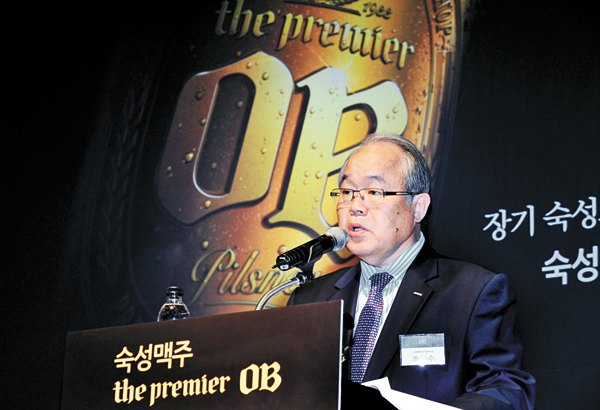 The new pilsner is made with German hops and malt, and contains no rice or corn.

That, according to the company, translates into a broader depth of malt flavor and a rich bitterness.

With the launch of the new beer, the brewery seeks to regain the unrivaled dominance it enjoyed before new players like Lotte Liquor entered the market. 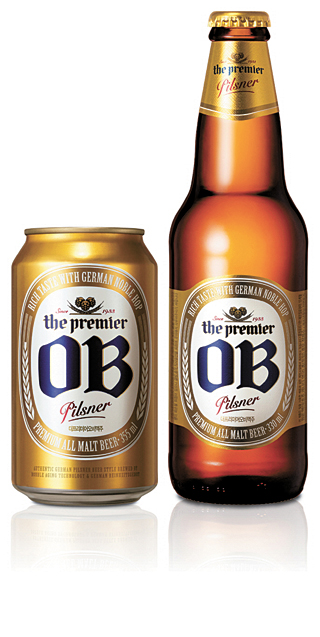 Lotte Liquor’s Kloud has emerged as the No. 1 seller in the malt beer category since it was released in April. Following Kloud is Max from Hite-Jinro. Golden Lager, the predecessor of The Premier OB, is also a malt beer.

The brewery said its new beer is brewed for a longer period of time than competitors and OB’s existing lineup.

The Premier OB is the company’s 11th label.

“We will market The Premier OB as a world-class beer capable of competing with other beers from renowned overseas brands,” said Oriental Brewery CEO Jang In-soo yesterday during a press briefing in central Seoul. “We devoted two years to researching and developing The Premier OB.”

Malt beers are typically up to 20 percent more expensive than regular beers, but The Premier OB will be priced the same as Cass.

“It can be categorized as a premium beer, but we set the price in line with our other beers,” said Jang.

Starting Friday, The Premier OB (500-milliliter bottle) will be available.

In September, OB announced it would improve its production by adopting a process called Voyager Plant Optimization, pioneered by the makers of Budweiser beer.

The announcement followed a controversy surrounding a dubious scent in Cass beer, and many saw the move as an attempt to enhance the brand image.

The brewery accused its biggest rival, Hite-Jinro, of spreading a rumor that the smell was caused by laundry detergent in the beer, causing sales to plunge. The Ministry of Food and Drug Safety concluded that a compound called T2N (trans-2-nonenal) triggered the distinctive smell and was not hazardous to human health.