Bae says he learned a lot, lost weight in North

Bae says he learned a lot, lost weight in North 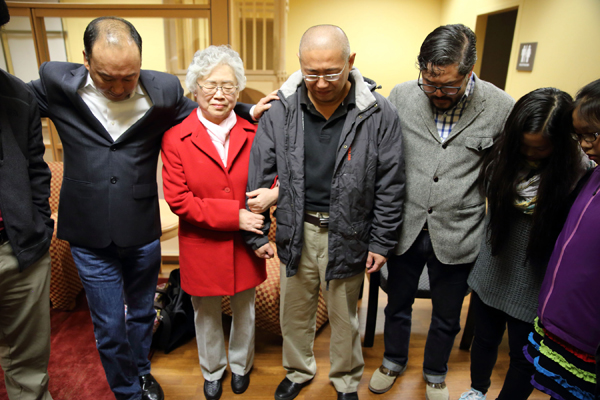 Kenneth Bae, center, and his mother Myunghee Bae, in red coat, pray with other family members after his release from North Korea Saturday. [AP/NEWSIS]


WASHINGTON - Kenneth Bae arrived home after years of imprisonment in North Korea, expressing his gratitude to the U.S. government for securing his release and revealing that his time there offered lessons.

“It’s been an amazing two years, I learned a lot, I grew a lot, I lost a lot of weight,” said Bae, a Korean-American missionary with health problems. Asked how he was feeling, he said, “I’m recovering at this time.”

He was one of the last two Americans held captive by the reclusive communist country to return home. Bae and Matthew Miller landed Saturday night at a Washington state military base after a top U.S. intelligence official secured their release.

Bae, surrounded by family members, spoke briefly to the media after the plane carrying him and Miller landed. He thanked President Barack Obama and the people who supported him and his family. He also thanked the North Korean government for releasing him.

“I just want to say thank you all for supporting me and standing by me,” Bae said. His family has said he suffers from diabetes, an enlarged heart, liver problems and back pain.

Members of Bae’s family, who live near the sprawling military base south of Seattle, met him when he landed. His mother hugged him after he got off the plane.

Miller stepped off the U.S. government aircraft a short time later and also was greeted with hugs.

U.S. officials said Miller of Bakersfield, California, and Bae of Lynnwood, Washington State, flew back with James Clapper, the director of national intelligence. Clapper was the highest-ranking American to visit Pyongyang in more than a decade.

Their release was the latest twist in the fitful relationship between the Obama administration and the young North Korean leader, Kim Jong-un, whose approach to the United States has shifted back and forth from defiance to occasional conciliation.

“It’s a wonderful day for them and their families,” Obama said. “Obviously, we are very grateful for their safe return.”

A senior Obama administration official said the president approved the mission last week and U.S. officials spent the next several days planning the trip. Clapper spent roughly a day on the ground and met with North Korean security officials - but not with Kim, the official said aboard Air Force One as Obama prepared to head to Beijing.

Clapper went with the sole purpose of bringing home the two detainees, although the U.S. anticipated that other issues of concern to the North would come up during Clapper’s discussions, the official said.

“It was not to pursue any other diplomatic opening,” said the official, who wasn’t authorized to comment by name and demanded anonymity.

The United States had considered sending someone from outside the government to retrieve the detainees, the official said, but suggested Clapper after the North Koreans indicated in recent weeks that they would release the detainees if the United States sent a high-level official from Obama’s administration.

Analysts who study North Korea said the decision to free Bae and Miller now from long prison terms probably was a bid to ease pressure in connection with its human rights record. A recent UN report documented rape, torture, executions and forced labor in the North’s network of prison camps, accusing the government of ``widespread, systematic and gross’’ human rights violations.

Bruce Klingner, a former CIA analyst now at the Heritage Foundation, agreed that efforts to shine a spotlight on the country’s human rights record “startled the regime and led to frantic attempts to derail the process.”

Bae was serving a 15-year sentence for alleged anti-government activities. He was detained in 2012 while leading a tour group to a North Korean economic zone. AP