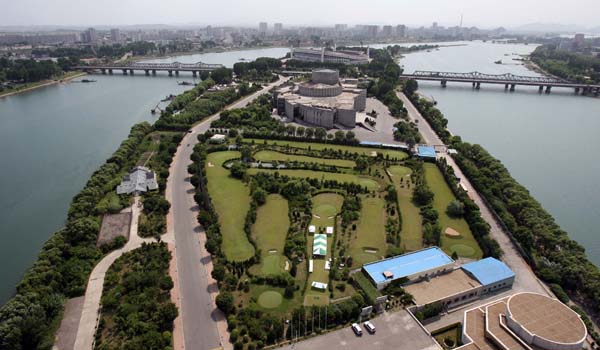 A file photo of the Yanggakdo Golf Course next to Yanggakdo Hotel in Pyongyang. The nine-hole course was demolished in 2012 for a major redevelopment project in the district. [Joint Press Corps]


Golf, once exclusively considered a sport for North Korea’s uber-elite, is becoming increasingly popular as a leisure activity under the reign of young ruler Kim Jong-un.

A miniature golf course at the Nungra People’s Amusement Park in Pyongyang was recently featured on a TV program aired by the North’s state-run Korean Central Television. In the show, titled “One Fine Sunday,” an approximately 10-minute-long segment detailed the origins of the game and its rules.

“Golf is a leisure activity loved by many players worldwide,” a professional instructor announced on the program.

The Nungra People’s Amusement Park in the North’s capital city was Kim Jong-un’s first ambitious development project. The young leader attended the amusement park’s opening ceremony in July 2012, six months after he inherited his role as head of the regime. 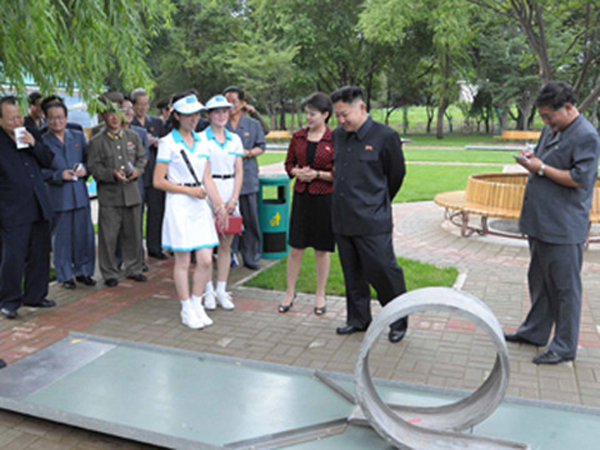 Kim has largely promoted sports considered luxurious to the people of the impoverished North. Skiing and horseback riding, as well as golf, have also been endorsed as leisure activities for ordinary people in the Communist nation.

Under the young leader, the North renovated a military horse-riding club into a public facility while the Masikryong Ski Resort was completed at the end of last year.

During the reign of Kim Jong-il, Kim Jong-un’s father, golf was considered a sport limited to Pyongyang’s few elite and wealthy members of pro-North organization the General Association of Korean Residents in Japan.

The nation’s first country club with an 18-hole course was completed in the late 1980s.

Pyongyang Golf Club, which is located about 40 kilometers away from the capital city, occupies a space measuring about 1.2 square kilometers next to scenic Thaesong Lake. It was finished in April 1987 to commemorate the 75th birthday of the North’s founder, Kim Il Sung, and was built with the donations of businessmen members of the pro-North general association.

The country club has about 120 workers, including 30 caddies. Students from the Kim Il Sung University and Pyongyang University of Foreign Studies once served as caddies, but most of them are now trained professionals.

Some South Koreans have had a rare opportunity for a round at Pyongyang Golf Club. Saenuri Party Representative Chung Mong-joon, who visited the North in November 1999 as head of the Korea Football Association, played a game of golf at the facility. He reportedly paid $95 for the round, including a rental fee for a set of golf clubs produced in Japan in the 1970s.

The North reportedly has other country clubs- one at a retreat that belonged to Kim Il Sung near Mount Myohyang and another in the Yongsong District of Pyongyang. But little is known about them.

A nine-hole golf course once existed next to the Yanggakdo Hotel in Pyongyang, but it was demolished to make way for a major development project in the area.

None of the North’s past and present rulers have been featured in state media playing golf, but Pyongyang has not missed the opportunity to use the sports to boost the Kim family’s personality cult.

Pak Yong-man, a professional golfer from North Korea, told an Australian newspaper in October 1994 that Kim Jong-il shot 38-under par in an 18-hole round that included 11 holes in one at Pyongyang Golf Club during his first ever game.

Golf was also once a symbol of inter-Korean economic cooperation. Emerson Pacific, a Seoul-based leisure firm, built a luxury golf and spa resort at Mount Kumgang in 2008. As the first golf course to be constructed by a South Korean company in the North, it was operated under a pilot program from May to early July 2008.

The 6,900-meter, 18-hole course drew media attention for its 929-meter par 7 hole (No. 12), the world’s longest, and its par 3 hole (No. 14), which is called the “funnel hole.” The green is designed like a funnel and any golfer whose ball safely lands on it will see it roll into the hole, resulting in a hole in one.

The death of a South Korean tourist by gunshot at the resort on July 11, 2008, however, effectively shut it down. Although the country club was maintained for a period of time after the incident, it is now barren.