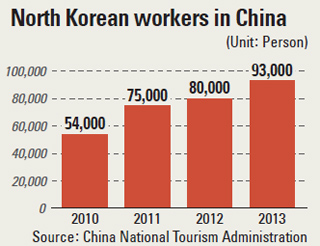 The North Korean work force in China is increasing, according to the Korea International Trade Association (KITA), indicative of the economic cooperation between the two countries.

The population of North Korean workers in China was recorded at 93,000 last year, having increased an average of about 20 percent annually over the past four years, KITA said in a report released yesterday by the association’s Beijing office.

Based on Chinese National Tourism Administration data, almost 44,000 North Korean workers entered China during the first six months of this year, and KITA estimates that this year’s total will be similar to figures for 2013.

“The North Korean workers population is rising so rapidly that some Chinese [workers] are demanding the government conduct more thorough analyses before issuing visas to unskilled workers,” said Choi Yong-min, who heads the KITA branch in Beijing. “But when solely considering economic efficiency, China-based companies are more likely to increase their hiring of cheap North Korean laborers in the mid and long term.”

Demand among Chinese manufacturers for North Korean workers has risen largely due to cheap labor costs. The average North Korean worker makes about 1,600 yuan ($261) a month, much less than workers from other countries and about half of the 3,000 yuan per month that a China-based company pays a local worker.

Choi explained that most North Korean workers in China are in their 20s and 30s and acknowledged their diligent work ethic, which in turn leads to higher productivity.

“From China’s point of view, hiring cheap North Korean workers is a breakthrough to boosting corporate competency by reducing personnel costs,” the report said. “[This mutual benefit] is creating a new model of economic cooperation between Beijing and Pyongyang.”

The KITA report stressed that Korean companies operating production lines in China, many of which have suffered from labor shortages and high labor costs, should consider encouraging local subcontractors to hire North Korean workers.

In a survey conducted by the KITA office in Beijing of 280 Korean companies operating in China, more than 85 percent answered they were experiencing work force imbalances. And companies based in manufacturing meccas like Guangdong, for example, are suffering work force shortages.

Beijing and Shandong, where the most Korean businesses are operating, have seen their minimum wage double in recent years. The monthly minimum wage this year in Beijing is 1,560 yuan. In Shandong, it’s 1,500 yuan.