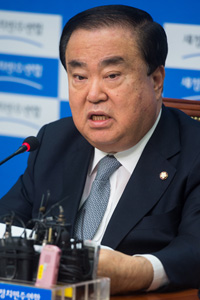 The main opposition party yesterday launched an aggressive attack at the Park Geun-hye administration over disintegrating day care programs, urging the government to increase taxes on the rich to finance day care and school lunch programs.

“A confrontation has emerged between those supporting free day care and those backing free school lunches,” Moon Hee-sang, interim head of the New Politics Alliance for Democracy, said yesterday at a party leadership meeting. “The government and the ruling party are unreasonably pushing forward the free day care program, and the free school lunch program is being squeezed.”

Last week, heads of local governments demanded the central government step in with financial aid. They said they will no longer be able to back basic pension plans and free day care service for preschool-aged children without government assistance.

Remarks by a top Blue House economic aide fueled the controversy. An Chong-bum, senior presidential secretary for the economy, said Sunday that the free day care program for children aged three to five was a presidential election pledge of Park and local governments and regional education offices must implement it with priority over the free school lunch program, which was not promised by the president during her campaign. 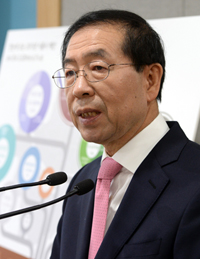 After An’s remarks, Moon criticized his approach. “Without reflecting the 3.9691 trillion won [$3.7 billion] required for the free day care program in next year’s budget, the Park government is trying to hand the burden to the regional educational offices,” Moon said. “That is irresponsible.”

He said giving up the free school lunch program is not a solution to continuing free day care services. “Treating the situation as an extreme dichotomy by choosing either the Saenuri Party’s day care program or the opposition party’s school lunch program will bring about a crisis,” he said.

Moon said a fundamental solution would be raising more resources, not giving up one of the programs.

The ruling and opposition parties must agree on withdrawing tax benefits for large business groups during upcoming budget deliberations to raise more resources for both the school lunch and day care programs, Moon said.

Park first won the mayorship in a by-election in 2011 after Oh Se-hoon lost a referendum in August on the opposition’s proposal of free school lunches and resigned. Park was reelected as Seoul mayor in June 4 local elections this year.

The mayor stressed that the city will continue providing free lunches to all students, adding that the budget for the program was already earmarked by saving other expenses.

The ruling Saenuri Party yesterday said the welfare programs must be reconsidered to more accurately reflect the budget situation.

“The welfare programs for our children are in a crisis because of the adults’ debate,” said Representative Lee Wan-koo, floor leader of the Saenuri Party. “I apologize to the people for the series of free welfare benefits promised during elections. I believe we must start being honest.”

He said fiscal conditions, the economic situation and welfare programs must be reviewed more thoroughly to define priorities, and urged politicians not to play politics with the issues.

Representative Joo Ho-young, chief policy maker of the ruling party, spoke more adamantly about the controversy. He said the day care program was stipulated by the law and local governments must pay for it, adding that the ruling and opposition parties revised the Early Childhood Education Act in 2012 to establish the legal grounds.

“But the school lunch program is without legal grounds and the local governments carried it out at their own discretion,” he said. “Day care is a legally introduced duty to raise Korea’s plummeting birthrate and provide quality childcare services, so it is not something they can arbitrarily decide on.”