After 209 days, search for Sewol victims is ended

After 209 days, search for Sewol victims is ended 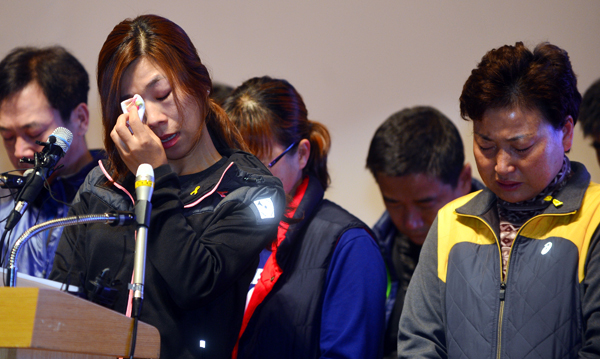 Families of the nine Sewol victims still unaccounted for hold a press conference yesterday in Jindo Gymnasium, where they officially announced their request that the government stop search operations to retrieve the remains. They have camped out there since April 16 awaiting the return of their loved ones. [NEWSIS]


The government yesterday wrapped up a nearly seven-month search operation in and around the sunken Sewol ferry despite the fact that nine victims are still missing.

The authorities said divers couldn’t hazard the growing dangers inside the disintegrating ferry or the drop in water temperature as winter approaches. Their decision comes 209 days after the April 16 sinking left more than 300 passengers dead in southwestern waters off South Jeolla, mostly 11th-grade students from Danwon High School in Gyeonggi on a field trip to Jeju Island.

“I offer my sincerest apology in announcing to you the end of search operations with my earlier promise unfulfilled - that I will find the last remaining victim from the wreck,” said a tearful Lee Ju-young, the minister of oceans and fisheries, during a press briefing yesterday at the central government complex in Gwanghwamun, central Seoul.

The minister, who has been praised across party lines for his leadership and the empathy he has shown to the victims’ families since the calamity, said the conditions for divers conducting search operations have become “too dangerous” with winter on its way and the growing possibility of internal structure collapse inside the ferry. He said there was consensus among experts on the site that divers’ lives would be put at risk.

Lee said in his emotional speech that the relatives of the nine missing victims requested the government to stop the search.

“The families of the missing victims have pain in their hearts for leaving their loved ones in the cold sea. And yet they request the government to stop the search efforts,” Lee said. “I express my deepest respect for their heartfelt, most difficult decision.”

With the ending of search operations, the government will consult experts on how to lift the 6,835-ton ferry from the seafloor 37 meters (121 feet) below the surface.

The government’s decision ends the 209-day effort that began as a tragically bungled rescue response to the sinking on the morning of April 16.

Video footage disclosed by the Coast Guard later showed not a single Coast Guard member going inside the listing ferry to tell passengers to escape.

Only 172 out of 476 passengers aboard the Sewol were rescued, including its captain, all on the first day of the sinking, while 295 were killed and nine are still missing. The incident is considered to be the country’s worst maritime disaster in history.

Thwarted by strong currents and gushing winds, divers took two days to enter the sunken ferry and three days to retrieve a body from the wreck.

Suspicions that the rescue workers weren’t doing everything possible to find surviving passengers in air pockets of the capsized ship led to a deep drop in approval ratings for President Park Geun-hye.

The final body found was of a female Danwon student. Divers found it on Oct. 28, 102 days after another victim was retrieved on July 18, raising hopes among families of the nine missing victims still camped out in Jindo Gymnasium.

The families hoped the final remains might be found in a cabin on the fourth floor of the ferry’s stern area, which has not been searched. But debris is blocking the way to the unsearched cabin.