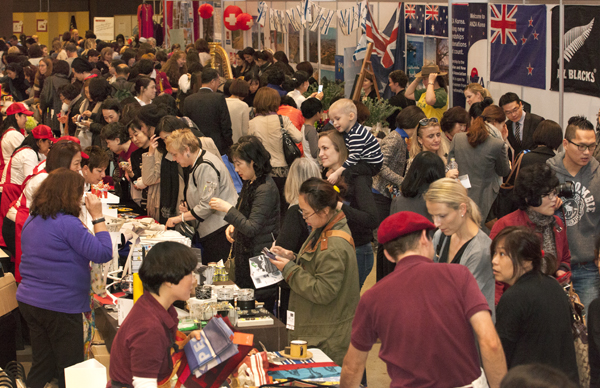 Visitors to the 35th SIWA and Diplomatic Community Bazaar at the 63 Convention Center shop on Monday for crafts and clothing. By Park Sang-moon

The annual bazaar, hosted by the Seoul International Women’s Association (SIWA), Seoul’s largest international women’s organization, has raised more than 2 billion won ($1.9 million) since 1970, with all proceeds going to support the underprivileged.

Proceeds from this year’s bazaar have yet to be calculated, the host said yesterday.

This year’s SIWA and Diplomatic Community Bazaar, one of the largest international fund-raising events in Korea, was supported by 43 embassies, charity groups, women’s clubs, vendors, sponsors and more than 100 volunteers.

SIWA members - many of them spouses of embassy officials - sold products representative of their home countries. At one table in the food court section representing the South Asian country of Sri Lanka, traditional tea and curry were the most popular menu items. Visitors eagerly waited in line, holding out their plates for another bite.

For Sumedha Wijeratne, the wife of the Sri Lankan ambassador to Seoul, who was at the booth selling products representative of her native country, participating in the bazaar was a “wonderful chance to promote Sri Lanka and learn different cultures.”

“At the end of the day, I feel very proud of my country, myself and my ladies at the embassy for helping me run this event and earn charity funds,” she said, adding that it was her fourth time participating in the annual bazaar.

At the Girl Scouts booth, girls who introduced themselves as members of Troop No. 12, sold homemade snacks including cookies, biscuits and chocolates.

The most popular baked good was their Oreo brownies, said 13-year-old Maria Lentine, adding that they sold out in the first hour.

Anna Grace Roberts, 13, emphasized their table’s originality. “Everything is homemade and handmade,” she said.

When asked what they enjoyed the most about the daylong event, both girls, who attend Seoul Foreign School, answered in unison with wide grins on their faces, “No school!”

Anna Grace added that she liked “walking around and seeing different things from many countries.”

Her personal favorite item was a calligraphy drawing of her name written in Korean characters, which came with a bookmark decorated with traditional Korean patterns.

“It’s really special for me, and I can’t wait to show my kids,” she said. “The Korean language is totally foreign for me, so when I look at the alphabet, it’s really interesting.”

At the Hall of Nations zone, located just a few steps away from the food court, volunteers sold an array of traditional crafts, knitted clothes, accessories and paintings.

For Shin, the bazaar was compelling because her donation went toward charity and offered her a chance to “learn what traditional items other countries have to offer.”

Lee Bock-hee, the vice president of SIWA, went further to underscore the key roles played by the ambassadors’ wives in the event, stating that it was important that they be “dazzled” by Korean culture upon arrival in the country.

“They’re only here for two to three years,” Lee said about the women. But once they get involved in local activities and grow fond of the country, the diplomatic roles they play later globally are “beyond words,” because they share their anecdotes with high-profile figures in the international arena.