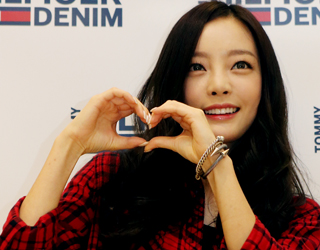 According to multiple industry insiders yesterday, Goo recently visited the house shared by celebrity participants of the program, which is located in Seongbuk-dong, northern Seoul.

Goo showed up at the house with bags of raw meat, which is Heo’s favorite food, and spent quality time with her bandmate and the other roommates by holding a barbecue.

The TV show features various stars, including Sunny of Girls’ Generation, Park Jun-hyung of g.o.d. and comedian Lee Guk-joo. It depicts the communal life of celebrities with different ages and nationalities.

The upcoming episode featuring Goo will be broadcast on Nov. 25 at 11 p.m. on SBS.

The show used to air on Sunday afternoons but will be moved to Tuesday nights starting Nov. 25.

Heo is a new member to the four-member group. She replaced Nicole, who refused to extend her contract with Kara’s entertainment agency.

Nicole recently became a solo artist. She has signed with the same entertainment agency as sexy diva Lee Hyo-ri.