Song Hye-gyo is a cover girl in China

Song Hye-gyo is a cover girl in China 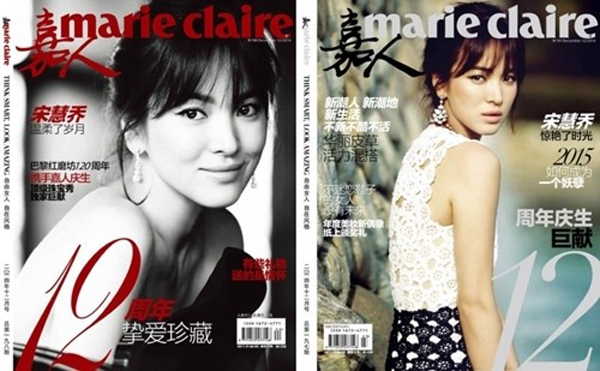 Actress Song Hye-gyo is on the cover of Marie Claire China’s December edition. The cover was posted on the official Weibo account of the Chinese film “The Crossing” yesterday, which features Song and Chinese actress Zhang Ziyi as its two lead actresses.

In the double-cover edition, Song’s photos are available in both black and white and color.

Song was involved in a tax-evasion scandal in Korea last month when her new film “My Brilliant Life” had just been released here, so she has kept a low profile since then in Korea. But Song is doing well in her Chinese career as two of her films will be released there next month.

One of them is “The Crossing,” directed by John Woo of “Mission Impossible 2” (2000). The film revolves around the sinking of a steamer named Taiping in 1949.

The epic drama feature will be released in China on Dec. 2 while Song’s other Chinese film, “The Queens,” will be unveiled on Dec. 12.

“The Queens” is based on a Chinese best-selling novel of the same title and depicts the growth of an actress who finds her true inner self after she experiences a series of trials. Song plays the role of the actress.