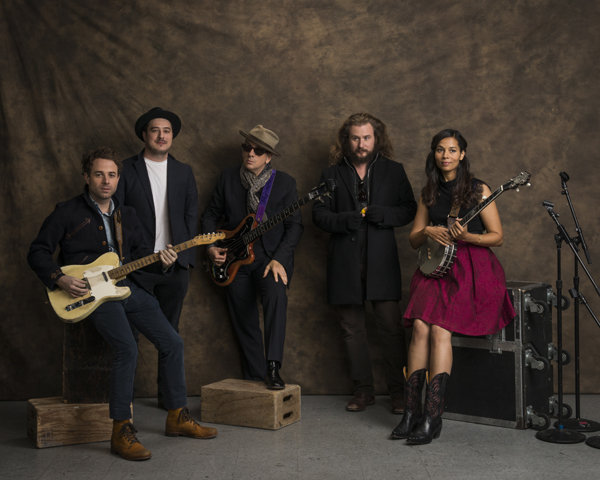 From left, Taylor Goldsmith, Marcus Mumford, Elvis Costello, Jim James and Rhiannon Giddens posing in New York in promotion of “Lost on the River: The New Basement Tapes,” an album produced by T Bone Burnett and created by the musicians using lyrics written by Bob Dylan for the legendary “basement tapes” recordings. [AP/NEWSIS]

It was a collection of typed lyrics written - and forgotten - by Dylan during his fertile “Basement Tapes’’ period in the late 1960s. The instructions were minimal: do with this what you will. This week, everyone can hear what Burnett did.

He booked a studio for two weeks and invited an insta-band of talented friends to transform the words into music. Elvis Costello, Marcus Mumford (Mumford & Sons), Jim James (My Morning Jacket) and Rhiannon Giddens (Carolina Chocolate Drops) answered the call and, at Mumford’s suggestion, Taylor Goldsmith (Dawes) was invited, too.

Nobody involved - even Burnett, an old friend - has spoken to Dylan about what they’ve done with his songs.

“We aren’t looking for any kind of blessing,’’ Mumford said. “It would be cool if he likes it, but in a way, he’s like everybody else now. He’ll hear it in the same light as everyone else.’’

Burnett purposely gave the participants about as much instruction as he’d gotten, sending them the lyrics and a start date. Most arrived with several written arrangements, with the exception of Mumford, who thought collaborating would be done on the spot.

It was an intimidating assignment. Giddens, for one, wondered if she’d pull her weight with more famous colleagues.

“You’d be a fool or an arrogant person if you don’t say initially, of course it’s daunting,’’ Costello said. “But then were you daunted in the sense that you were frozen? No. How did we cut 44 songs in 12 days? In order to do that, you need the skill to prepare and the ability to recognize the moment.’’

Burnett sought to keep people comfortable. In a film about the project that debuts on Showtime at 9 p.m. EST Nov. 21, he’s depicted as a kindly coach, offering quiet advice and a smile. He kept everyone moving: one or two takes, and it was time to try something new.

Chosen in part for their versatility, the musicians shuffled from instrument to instrument. Drumsticks for one song, guitar for another. Lead vocal on the music they composed, backup on others. Who has time to learn an arrangement? Just keep going.

The musicians tried to be inspired by the spirit of the original Basement Tapes, when Dylan woodshedded in upstate New York with The Band, making music with no expectations people would hear it. A five-disc box of those old sessions is on sale this fall.

The big difference is they knew, this time, that many fans would be keenly interested in what they were doing.

“We were trying to make a great noise together,’’ Mumford said. “We weren’t worried about how people would respond to it, how people would like it. There were enough of us in the room and we trusted each others’ tastes enough to know, well, if we all like it, somebody else in the world is going to like it.’’

The sessions were, as Giddens put it, a master class in songwriting and illustration of the malleability of songs. The group recorded four different versions of “Hidee Hidee Ho’’ and the title cut, “Lost on the River.’’ Two of each are on the 20-song disc released Tuesday.

“What is a song?’’ James said. “Why does one person’s brain see one set of lyrics and it’s a bashing rocker, and another person sees the same lyrics and it’s calm and tranquil?’’

It’s not like no one has ever tried to replicate the atmosphere of the Basement Tapes. The veteran Costello knows that it doesn’t always work, and credits Burnett for fostering a sense that the musicians couldn’t fail if they let themselves go.

“I like Jim’s idea,’’ Costello joked. “Write new music for ‘Blowin’ in the Wind’ and songs like that.”