Jobless rate is really over 10%

Jobless rate is really over 10% 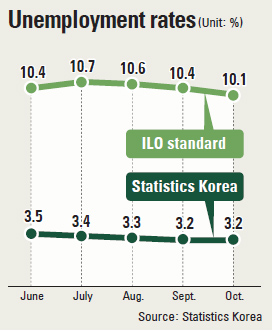 The Korean government started to release a new unemployment index in compliance with international standards to better describe conditions in the labor market.

According to a regular report by the government statistics agency yesterday, the nation’s unemployment rate stood at 3.2 percent in October, unchanged from the previous month and up from 2.8 percent in the same month last year.

The unemployment rate has been criticized by job seekers and some analysts as being ridiculously understated, particularly erroneous on severe youth unemployment.

“There has been criticism that there is a wide gap between the job indexes and how people feel,” Finance Minister Choi Kyung-hwan said at a committee meeting on national statistics earlier this month.

Under the agency’s method of calculation, the unemployment rate equals the number of unemployed aged between 15 and 64 divided by the total number of individuals economically active, which is the sum of the number of employed and unemployed people.

The agency defines the unemployed as people who applied for jobs in the past four weeks, who are able to work if employed and who didn’t work for the past week.

The new index, dubbed “Supportive Employment Index No. 3,” showed that the unemployment rate stood at 10.1 percent in the same month, about three times higher than the Statistics Korea figure.

This means one out of 10 Koreans aged 15 or higher do not hold jobs.

For the past five months, the index hovered above 10 percent.

The new index takes into consideration the number of people who are willing to work but aren’t working.

It also includes the number of part-time employees who work less than 36 hours a week.

The new index found that the number of part-time employees was 313,000 last month. The number of people who are likely to hunt for jobs in the near future turned out to be around 1.7 million. In total, about 2.87 million Koreans were not working as of last month.

“The concept of people who are willing to work is different from the already unemployed,” said an official at the Ministry of Strategy and Finance.

“They are considered part of the ‘potentially economically active population,’ which accounts for a large portion of the Korean population.”

In Korea, many college graduates spend years preparing for various examinations to get jobs at desirable companies or become public servants.

The percentage of Koreans economically inactive aged 15 through 29 is 56.8 percent, according to 2013 figures.

The International Labor Organization (ILO) established new standards that consider willingness to work as a new element of the unemployment index in October 2013.