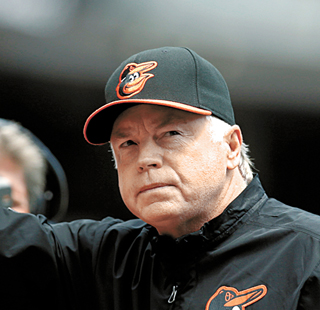 Baltimore’s Buck Showalter was voted American League Manager of the Year for the third time on Tuesday, and Washington’s Matt Williams won the National League honor following his first season as a big league skipper.

Showalter received 25 of 30 first-place votes and 132 points in balloting by the Baseball Writers’ Association of America. He kept up his pattern of winning the award once a decade, after victories with the Yankees in 1994 and Texas in 2004.

Showalter guided the Orioles to a 96-66 record and their first AL East title since 1997. Voting took place before the playoffs, where Baltimore swept Detroit in the Division Series and then was swept by Kansas City in the AL Championship Series.

Until the ALCS, the Orioles had not lost four in a row since May and had not dropped consecutive home games since June 28-29.

Williams, who played under Showalter in Arizona from 1998-00, guided the Nationals to an NL-best 96 wins. He joined Houston’s Hal Lanier (1986), San Francisco’s Dusty Baker (1993) and Florida’s Joe Girardi (2006) as the only men to win for their first seasons as big league managers.