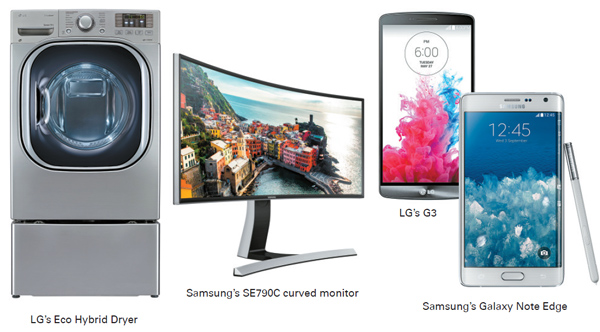 Samsung Electronics and LG Electronics will grab a stack of CES Innovation Awards for their products at CES, the world’s largest consumer electronics show that will be held in January in Las Vegas.

According to Samsung and LG yesterday, the Consumer Electronics Association, which organizes CES, said last week that the companies will receive a total of 46 innovation awards for their products.

The CES Innovation Awards are given to products with advancements in technology, design and engineering. The awards are selected by a panel of prominent tech designers, engineers and journalists who judge the entries on criteria including user value, aesthetics, innovative design and contribution to quality of life.

The tech giant’s Galaxy Note Edge, the world’s first phone with a screen that wraps around the edge, and a new TV that will be launched at CES will receive awards in the Best of Innovations category.

Samsung Electronics’ TVs will win a record of 11 awards and will take the Best of Innovations Award for the fourth consecutive year.

LG Electronics said in a statement yesterday that the CEA will recognize the company’s designs and technology with 10 awards.

The year 2015 will mark the third consecutive year LG’s OLED TVs and G series phones have won innovation awards at the event.

LG has won more than 150 Innovation Awards over the past 10 years.

Other award-winning LG appliances, TVs and computer monitors will also be announced at the show in January.

“Our 2015 CES Innovation Awards in multiple categories are proof of LG’s commitment to our brand promise: innovation for a better life,” said William Cho, president and CEO of LG Electronics USA. “At CES in January, we look forward to showing how these groundbreaking new products can seamlessly fit into and even enhance consumers’ lives.”