About a week after Hyundai Motor Group Chairman Chung Mong-koo ordered the nation’s two largest automakers to improve fuel efficiency by 25 percent by 2020, Hyundai Motor and Kia Motors yesterday announced a plan to expand their current lineup of seven high-mileage models to 22 over the next six years.

The company said the current environmentally friendly car market of 2.2 million cars will grow to 6.4 million in 2020.

“We will try to develop a system that can provide the best fuel efficiency, core technology for auto parts and price competitiveness for environment-friendly cars,” said a Hyundai spokesman. “The competition is getting tougher every year and what we are trying to do isn’t only a strategy against foreign competition, but a way to create new demand.” 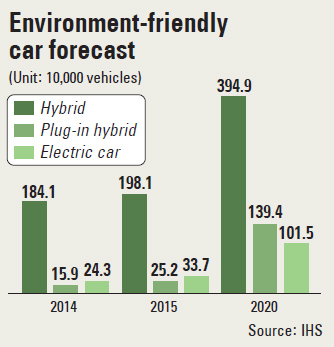 “Our new Sonata Hybrid will be introduced next month,” said a Hyundai spokesman. “We will also expand the lineup by introducing small hybrid sedans and SUVs. The reason we decided to focus on HEVs is because more than 60 percent of the environment-friendly car market in the future will be HEVs.”

The companies currently don’t have any plug-in hybrid electric vehicles (PHEVs), but it will introduce six models starting with the Sonata PHEV next year. A PHEV is similar to a hybrid electric vehicle (HEV), but has a larger battery that can be charged by plugging it into a standard 220V electric outlet. It also offers better mileage. The automotive group said it will also develop models bigger than the Sonata PHEV.

Hyundai said the market will grow fast, since the United States, Europe and China give subsidies to PHEV buyers and offer some incentives to automakers to develop cars with better fuel efficiency.

Kia currently sells two electric vehicles (EVs) - Soul and Ray - and will not develop any new models. Instead, the company will focus on improving the fuel efficiency of existing cars and developing next-generation batteries. Kia also wants to improve its 148-kilometer (92-mile) range per charge.

Hyundai said it will also introduce another hydrogen fuel cell electric vehicle (FCEV). The company this year started selling the Tucson ix FCEV in Europe. The vehicle has a 100-kilowatt fuel cell stack and a 100-kilowatt drive motor that produces a maximum speed of 160 kilometers per hour (99 miles per hour) with a range of 415 kilometers per charge.