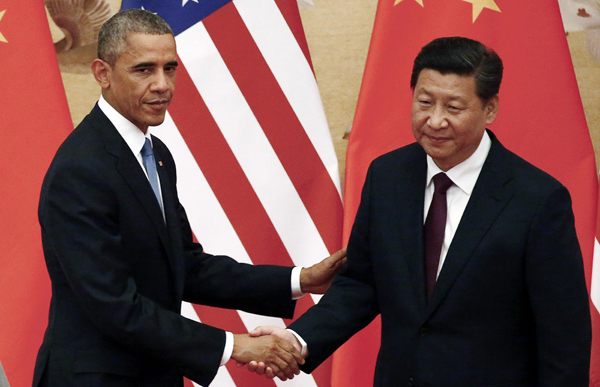 U.S. President Barack Obama, left, shakes hands with China’s President Xi Jinping in front of U.S. and Chinese national flags during a joint news conference at the Great Hall of the People in Beijing yesterday. [REUTERS/NEWS1]


Korea found itself caught between the United States and China during the Asia-Pacific Economic Cooperation (APEC) forum in Beijing, a position it’s likely to be in more often as China’s clout challenges that of the United States in the region.

President Park Geun-hye, in a speech at the opening of the first session of the APEC summit Tuesday morning, expressed strong support for a road map Chinese President Xi Jinping has proposed toward the realization of negotiations for the China-led Free Trade Area of the Asia-Pacific (Ftaap).

Those remarks spurred speculation among experts and the media that Korea was increasingly leaning toward China and drifting from the United States, its longest and closest ally, especially after the conclusion of a free trade agreement between Korea and China just a day earlier. The United States wants Korea to join its proposed Trans-Pacific Partnership (TPP), a free trade area that excludes China.

Ahn Chong-gi, the economic diplomacy coordinator at the Ministry of Foreign Affairs, was forced to claim in a briefing for Blue House correspondents that Park’s comments “leave no room for controversy.” Ahn noted that the China-led trade pact was supported by all 21 member countries of APEC.

On Saturday, APEC trade and foreign ministers agreed to conduct a “collective strategic study” over the next two years of Ftaap.

Ahn cautioned the press not to whip up controversy roughly 10 hours after President Park and U.S. President Barack Obama had a 20-minute face-to-face talk. Ju Chul-ki, the senior presidential secretary for foreign affairs and security, said he overheard Obama explaining current proceedings of the TPP to Park.

Korea earlier expressed its intention to join TPP negotiations but has yet to actually do so.

“We also hope to be able to smoothly move forward with our consultations with the TPP members so we can actually realize Korea’s formal participation in the TPP,” Park said in an interview with Bloomberg News earlier this year.

Facing the rapid rise of Beijing,Washington has promoted the TPP since 2009 and has been negotiating with 11 countries, excluding China.

The deal is often compared to Ftaap, an idea China came up with in 2006 to turn the Asia-Pacific region into a free trade zone. The United States is on the verge of failing to meet its initial goal to complete the negotiations for the partnership by the end of this year.

With the growing pressure of being sandwiched between the world’s two largest economies, Korea needs to make the strategic choice of being “ever more diplomatic,” said Prof. Kim Dong-ryul of the Korea National Diplomatic Academy.

Basically, it needs to be as ambiguous as possible.

“Giving an impression that Korea specifically favors one country won’t help, given that negotiations are still under way,” he said.

Recently, Park was set to publicly describe the difficulty of being squeezed by two world superpowers - but chose not to.

Two months ago, Park was set to say during an address to heads of major diplomatic and security think tanks in New York: “Some have the view that Korea has been enchanted by China but that comes from a misunderstanding of the nature of the Korea-U.S. alliance. I hope this could offer a chance to destroy that perspective.”

The remarks were in the final draft of the speech distributed to reporters hours in advance.