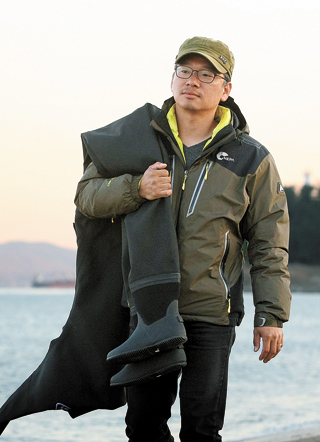 More than 200 days have passed since the Sewol ferry capsized on April 16, and in that time, 295 bodies have been recovered.

But behind that figure there are more than 100 divers who risked their own safety, even death, to find the missing in treacherous waters off Korea’s southwestern coast. Two divers died in the rescue operations and nine passengers remain unaccounted for.

The government officially called off search efforts on Tuesday, citing the hazardous condition of the disintegrating ferry and the drop in water temperature as winter approaches as the primary reasons.

The JoongAng Ilbo sat down with Yu Gi-ju, 39, who leads a team of civilian divers that goes by the name 88 Underwater Development, yesterday to hear more about his journey over the past few months. The following is an edited excerpt:

Q. How do you feel about wrapping up your seven-month search operation?

A. I’m heavy-hearted. I was tasked with finding all [the missing bodies], but I couldn’t, and I’m so regretful. I know I’m not the one to blame, but I’m a father myself. Inside, I’m burning.

With winter just around the corner, what was it like to work underwater?

The water was clear in the upper part of the ocean. But below that, it was muddy and the currents were slow. I estimate that by next year, mud will pile up to almost a meter high in the sunken ship. I couldn’t see a thing in those circumstances.

What went through your mind when you were diving?

Right before diving, I always thought about my family and the lost victims I had to find. But when I came back out with nothing, I felt regret. Emotions rushed through me. The working environment was dangerous and I previously lost a colleague. I continued working with this weight on my shoulders.

You lost your co-worker?

Lee Min-seob. During the first trial cutting open the ship’s hull, I was planning to finish off the work, but he said he’d do it instead. And he died. I feel so guilty. He’s older than me [47], and we’ve crossed paths several times in this business as divers. I could’ve been injured but it was he who eventually did.

How did your family react throughout the rescue operation?

I live in Pohang with my wife and fifth-grade son. My family previously accepted my working conditions pretty well, but ever since I worked on the Sewol ferry, they’ve grown pretty upset. They urged me to return home, but I refused to. I feel a bit sorry for my wife because she worried a lot about me.

What did you tell your son?

That I love him. And that I’d be home soon.

The difficulties in the search operations have been discussed for quite a while now. How did the divers’ opinions conflict with those of the victims’ relatives?

Since June, we’ve continuously said that normal search operations would be difficult to conduct. The cabins were falling apart. We’ve made several suggestions, but the relatives were afraid the missing bodies would be damaged. Basically, we were working out of the norm. Oxygen was accumulating inside the sunken ship, and we couldn’t share our workload with other rescue teams due to their lack of knowledge about special techniques.

How did your colleagues handle the aftereffects?

Some divers suffered from waist-down paralysis, while others often felt nauseous. When you inhale too much oxygen, you feel dizzy underwater and hear a loud ringing in your ears. They couldn’t sleep at night. Divers were supposed to work three to seven days a month and then rest for 20 days to drain all the oxygen out, but we normally worked every day for five months.