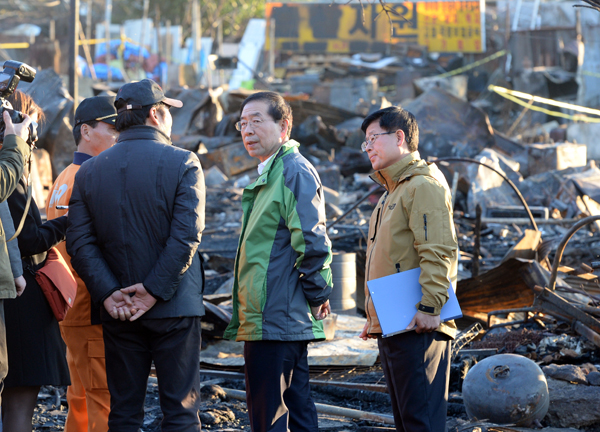 
Following a blaze on Sunday that burned down a section of Guryong Village and claimed the life of a 71-year-old resident, authorities established two emergency shelters for the displaced.

One stands near the entrance of the neighborhood, Gangnam District’s last shanty town that is home to about 1,200 unauthorized, low-income homes that have sprung up there since 1988, while the other was set up at Gaepo Middle School on Monday.

But in the former, in the village town hall, residents tussled with Gangnam District Office employees.

“Are you ignoring us?” one resident shouted angrily. “Gangnam District Office head Shin Yeon-hee has never visited us and they’re not offering food here.”

But over in Gaepo Middle School, about 200 meters (218 yards) away from the town, the situation was far different and civil servants and volunteers were working to provide the homeless with food and assistance.

“We couldn’t set up two shelters, so we decided to have one here,” said an official from the district office. “But those who are staying at the village hall refuse to move here.”

The tension, however, has less to do with the fire, and more to do with a prolonged dispute between officials and Guryong residents over redevelopment plans for the village. And the contrasting emergency shelters, while serving as a literal divide among residents, also represent an ideological separation.

Those staying at the village hall are mostly members of the Guryong Village Residents Association, an official group representing residents who were mostly in support of the Seoul Municipal Government’s proposal to reduce public redevelopment costs by allowing landowners to maintain some of their property while receiving compensation.

The city originally planned to clean up the entire area by compensating property owners and then redeveloping the land. However, after Seoul Mayor Park Won-soon took office in 2011, the city backtracked and decided to redevelop less of the area due to financial constraints, proposing instead to give back a portion of the land to property owners.

Those in the middle school, on the other hand, are mostly members of the Village Association, which supported the Gangnam District Office’s idea to purchase the entire area from tenants to prevent a few landlords from earning massive profits as well as property speculation.

Both sides insist their shelter is the real deal.

“We should set up the shelter here because it’s near the scene of the fire and residents can keep using the facilities,” said Ryu Gwi-beom, who heads the Guryong Village Residents Association. “Gangnam District and the Village Association established another [shelter] just to cause trouble.”

However, Lee Young-beom, the leader of the Village Association, countered: “This one is genuine; there are more people here.”

The conflict among residents has been brewing for more than two years now, simmering alongside a related and growing dispute between the district office and the city government over how to go about redeveloping the village. With both authorities failing to agree on a course of action, redevelopment plans were canceled in August, sending the city and the district back to the drawing board.

Still, the Guryong Village Residents Association contends that returning part of the land is realistic and that the Village Association has been widely influenced by the Gangnam District Office.

Yet, the Village Association claims that the district office’s outline was more practical because it prevents benefits from going to just a few landowners; it also suspects the Residents Association of being connected to property speculators.

The standoff has become so tense that some Guryong residents have gone so far as to allege that the fire over the weekend was an arson attack.

“They say the fire started in a bathroom, but how can a fire break out in the bathroom if no one started it there?” a member of the Residents Association said. “Gangnam District would definitely want us to be weakened by the fire.”

Another Guryong resident, however, told the JoongAng Ilbo that the Residents Association had driven some people out of the town, claiming they weren’t original inhabitants.

“Some of them may have a grudge, and maybe they set the fire,” the source said.

Since the incident, the city government and the Gangnam District Office have promised to resume discussions over plans for Guryong Village.