Korea and Denmark boost ties in the food sector

Korea and Denmark boost ties in the food sector 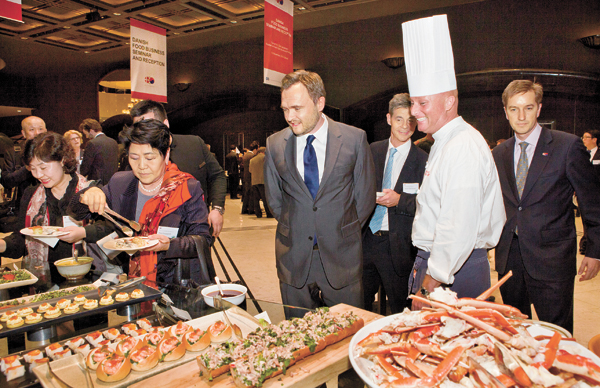 Dan Jorgensen, the Danish minister of food, agriculture and fisheries, center, and Thomas Lehmann, the Ambassador of Denmark to Korea, far right, introduce Danish foodstuffs on Monday at the Grand Hyatt Hotel in central Seoul. By Park Sang-moon

A delegation of food authorities and CEOs, including Dan Jorgensen, the minister for food, agriculture and fisheries, visited Seoul this week to strengthen ties with their Korean counterparts in the areas of sustainable growth and development.

It has been 55 years since the two countries first established diplomatic relations.

Jorgensen remarked during the Danish Food Ingredients Seminar Program on Monday that Korea and Denmark have “great potential” in developing ties in the food sector and laid out Denmark’s strengths.

“Denmark has a long history and a strong tradition in production of high quality food products that are clean, safe and manufactured in a sustainable way,” he said at the Grand Hyatt Hotel in central Seoul, adding that the country’s “complete transparency” in processing its foodstuffs has bolstered the credibility of Danish goods.

Jan Laustsen, the director of the Danish Agriculture and Food Council, said in an email interview with the Korea JoongAng Daily that similar efforts there have been ongoing for centuries as Denmark tries “to optimize all parts of the value chain, from the farmer to the consumer.”

A groundbreaking agreement between the two was not reached this week, as a food partnership remains in its infant stages, but the Embassy of Denmark announced that both sides agreed to sign a memorandum of understanding (MOU) in the near future to share organic farming techniques.

Joo Yi-seok, the commissioner for the Animal and Plant Quarantine Agency of Korea, underscored the importance of developing ties in the food production system at Monday’s seminar, given the fact that Denmark is leagues ahead in manufacturing safe and healthy products.

Denmark’s total exports of food and agricultural items, including agro-industrial products and ingredients, to Korea amounts to $140 million, according to statistics provided by Laustsen.

Denmark is the third-largest import market for Korea of chicken, and the 13th-largest in pork meat, Joo said.

Although Danish food businesses have yet to gain a strong foothold in domestic markets, they were briefly lauded in 2008 when the government launched Foodpolis, a specialized economic hub in Iksan, North Jeolla, for food processing and technology.

While announcing future plans, the government cited the success of the Danish Food Cluster, which Laustsen, too, acknowledged as Denmark’s backbone.

The Korea project, designed to be a hub for companies with a similar focus, is expected to be completed in 2020 and had been joined by 48 foreign food companies and research labs, as well as more than 50 Korean food manufacturers, as of September.

The Danish delegation was in Seoul from Sunday to Tuesday. This was Jorgensen’s first time to Korea.