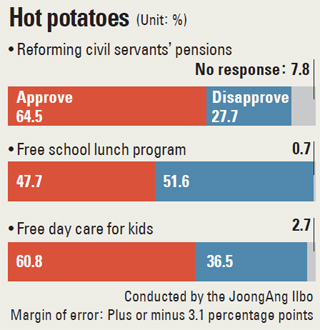 Nearly two-thirds of Koreans support reforming the debt-stricken pension system for civil servants as proposed by the government and the ruling Saenuri Party, a survey conducted by the JoongAng Ilbo showed.

In a survey conducted on Monday and Tuesday of 1,000 adults nationwide, 64.5 percent of respondents said they support overhauling the money-losing pension program for government workers, which has high deficits that require taxpayer money to keep it afloat.

Only 27.7 percent of respondents disapproved of the plan.

On whether they support a plan proposed by the governing Saenuri Party last month - in which the party aims to raise the monthly contributions to the pension program while slashing future benefits and to delay eligibility for benefits to the age of 65 by 2031 - 19.9 percent said they highly endorsed that plan, while 42 percent said they supported the idea in general, easily outnumbering 31.1 percent of respondents who said they were against the Saenuri plan.

Support for the Saenuri plan turned out to be influenced by the respondents’ support for the ruling party. Nearly three-quarters of those, or 74.8 percent, who identified themselves as Saenuri supporters endorsed the Saenuri’s plan while 58.4 percent of those who said they were Democrats supported the overhaul.

Respondents who are self-employed expressed a strong wish for the government to rein in the program, which has been criticized for doling out overly generous benefits to retired civil servants.

The poll showed that 82.8 percent of self-employed respondents, for whom it is optional to subscribe to the separate National Pension Service, support the reform. Such people commonly lag behind in their contributions to the pension plan compared to salaried workers.

On why reform is needed, 42.3 percent cited the need to reduce budget deficits while 41.3 percent said people under the National Pension Service should be on an equal footing with retired government workers in terms of pension payouts. The civil service pension is far more generous than the system for non-civil servants.

According to government data, former bureaucrats receive 2.19 million won (about $2,000) in average monthly pension payouts, while the national pension system average is almost one-third of that, at 840,000 won. Of those who opposed the reform, 43.2 percent said they were against it because the government has been pushing the agenda unilaterally without consulting those who will be affected.

On the free school lunch program, a welfare issue that has become a political hot potato, opinions were almost evenly split with a gap within the margin of error. Asked whether they support the free meal program, 47.7 percent said they did while 51.6 percent answered otherwise. The margin of error was plus or minus 3.1 percentage points.

Of those who support the program, 43.9 percent said since meals are part of a compulsory education course, they should be provided free. Of those who disapproved, 71.9 percent said it was not right to give welfare benefits without considering the income levels of the children’s parents.

When asked about free dare care for toddlers under the age of 5, 60.8 percent said they support the welfare policy, easily outnumbering those who were against it at 36.5 percent.

On who should pay for the free day care, 29.7 percent said the central government because it was President Park Geun-hye’s campaign pledge, while 29.5 percent said the burden should be shared by education offices and the government.