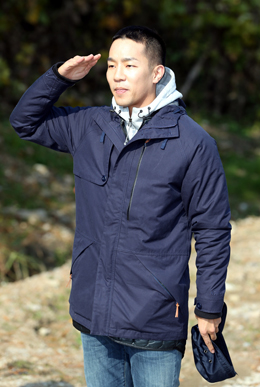 Singer Sangchu, who was discharged from his mandatory military service three months ago, gives a salute in this photo taken before he enlisted in 2010. [JoongAng Ilbo]


Local musician Sangchu wants to clear his name. When the Mighty Mouse member was serving his military duty as an entertainment soldier, it was rumored that he was a frequent visitor to brothels disguised as massage parlors. The singer, whose real name is Lee Sang-cheol, again made entertainment news headlines earlier this year because of allegations that he pretended to be sick in order to stay in the hospital and dodge Army service.

Although the military cleared Sangchu of these accusations after an investigation, the public is still not happy with him.

In the three months since the singer was discharged, he revealed in a recent interview with Ilgan Sports, an affiliate of the Korea JoongAng Daily, that he has mostly been working on his music.

Q. Do you dislike having interviews with media companies after the allegations the press published about you?

A. I just don’t want to give any excuses. There are some things I can’t change no matter how hard I try.

Why did you post an explanation on social media about the truth behind the rumors that circulated about you?

I thought it through for about two months, and I edited the post over and over again [before publishing it]. Most people didn’t read the post and just started cursing. I knew I would mostly get those responses, but I still published the post because I had nothing to lose. I wrote the post hoping that at least one or two people would hear me out, even though I knew 1,000 others would talk badly about me.

Why did you enlist voluntarily to fulfill your military duty when you were authorized to serve as a civil servant?

I did that because I didn’t want to be blamed. I don’t regret my choice.

But you became embroiled in trouble due to your behavior while serving as an entertainment soldier.

There are many things I did wrong, but many things were fabricated. We were never free all the time. Maybe once a month [when we went outside the base to entertain other soldiers].

Did you go to a massage parlor?

I want to make something clear here: I never said I went for [medical] treatment purposes. But it seemed like [the story] became so troublesome and [people told me] it was a very lame excuse.

Se7en and I went to get massages. We went to a parlor that offers Chinese-style massages but had to leave since there was no receptionist there, and the second place that offers Thai-style massages was closed. This was all cleared up through surveillance camera records in investigations done by the Ministry of National Defense. That never made it into the original report on TV, which I think is unfair.

So how did you end up going to a massage parlor that offers sexual services?

We knew where we were going. We asked if we could really get just massages and nothing more. The answer was yes, so we waited.

Then why did you leave without getting one?

We left after 10 minutes because we began to think it could be a problem. [We discussed] how we would prove that nothing illegal happened if the police were to raid the place, which scared us so we left.

How can you prove that you didn’t do anything illegal at the massage parlor?

The public mostly thinks we went to a military jail because we illegally used prostitutes. However, we were completely cleared of that charge. We went to jail because we left the workplace [without approval] and due to mistreatment of military goods. The military police didn’t believe us at first but later on, after the investigation, they told us that [they were sorry].

What about the rumors that you were trying to dodge military service?

I injured a ligament a week before the massage parlor story came out. I was scheduled to get surgery, but the story came out and I was relocated to the front line and also didn’t receive the operation.

How did you work with an injured leg?

I worked for three months then collapsed during training and was escorted to a military hospital. The doctors at the hospital said my ankle needed surgery as I had a broken ligament and my cartilage was ripped. My shoulder had also gotten worse.

I really didn’t want any surgery because I was scared of what the public would say. I couldn’t have two operations at the time, so it was decided that I would get surgery on my shoulder first and then on my ankle. While I was in the hospital, a news story came out that said I was faking my illness.

Tell us more about your time in the hospital.

I was there for about five months. People criticized the fact that I was in a solitary room but that was requested by the military. I was in a room with 60 people for about three months, but it got too crowded because so many people visited me. Also, I had some serious skin problems from stress, so I was advised to be in an isolated room. After a month there, news stories started to say I had been in the hospital for about six months.

Is that why you went back to the base?

That was when I felt the saddest. I had to leave the hospital when my ankle was still recovering. The rehab process was supposed to take six months, but I had to come back within a month. Other high-level officers told me to ask for relocation or to rest, but I didn’t want to do that. I used a stick and participated in all the training. I wanted to show that I was trying hard.

Do you resent the public or the media now?

I don’t, although I imagined that I would. In fact, sharing excuses doesn’t mean anything to me anymore. I just want to show a better side of myself and bring the public good music.

Have you started working on music?

I tried to calm myself down when the situation was at its toughest by writing lyrics. That was the only way out for me. Music is something I can do well. Since I can’t really get around freely, the only two things I can do is work on my music and get well.