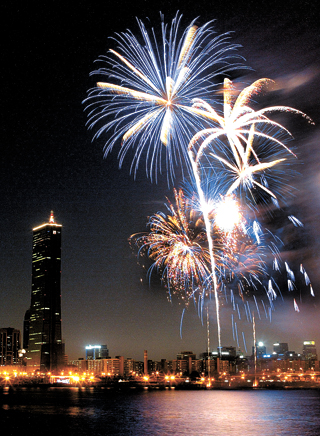 
Hundreds of festivals are held all year around in Seoul, but none enjoys the superstar status of Seoul International Fireworks Festival.

In order to secure better spots at the annual event that displays awe-inspiring pyrotechnics over the Han River, nearby parks are filled with crowds early on during the day of the festival. 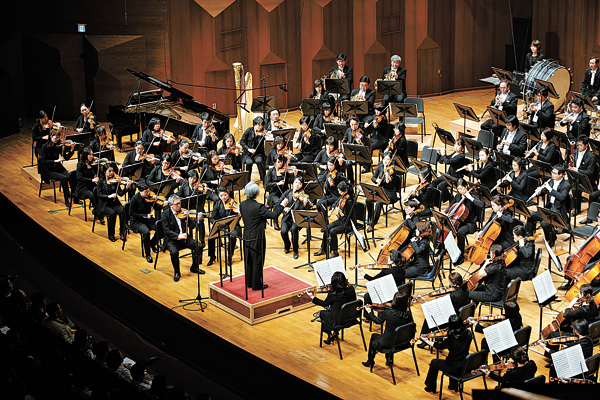 Hanwha Group sponsors city-run orchestras by holding an annual symphony festival, inviting them to Seoul to play their music to a wider audience.

Traffic is controlled in some parts of downtown Seoul and subway line No. 5 skips Yeouinaru Station, the nearest stop to the venue, in order to minimize chaos.

An average one million people put up with the hassle every fall to watch the two-hour display. 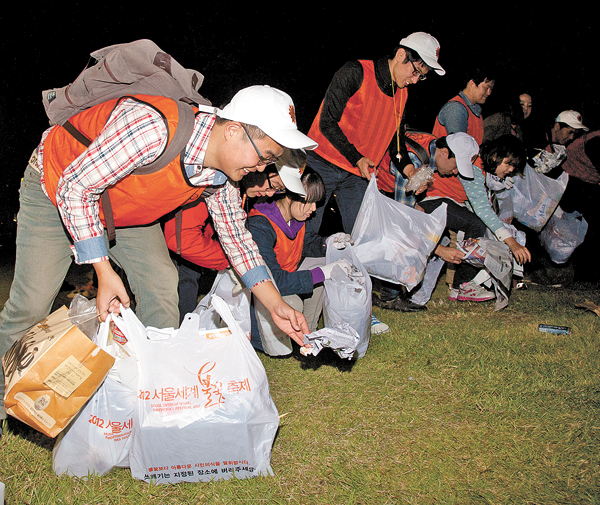 After the fireworks festival held every October, about 500 Hanwha Group employees voluntarily pick up trash. Provided by Hanwha

“Before the show begins, I always think to myself ‘Why am I here again?’ while being constantly pushed by other people,” said Ahn Ji-eun, a 24-year-old college student who is a regular at the event.

“But when the show begins, it compensates for all the troubles I had on my way there.”

The fireworks festival is an autumn ritual for many of Korea’s residents, but few know that Hanwha Group sponsors the event each year.

The conglomerate manages the whole process, from inviting overseas fireworks teams to providing the explosives.

This year’s festival was the 15th edition. It was held on Oct. 4 and one team each from Britain, China, Italy and Korea presented their own pyrotechnics for about two hours.

“Hanwha began its business with explosives,” said Kim Young-sik, the head of public relations team at Hanwha Group, when asked why the conglomerate does not aggressively promote the fireworks festival as its brainchild.

“As the country achieved economic growth, the company became this big, and we think this is one way to return what we’ve earned to the public.”

Having been founded in 1952 as Korea Explosives Inc., which produces explosives that are used to demolish old buildings, the company grew into one of the largest conglomerates in the country.

“We have had many ups and downs over the course of holding the festival,” said Kim.

The festival has always meant to be a good deed organized by Hanwha, but the company has occasionally come under fire because of the huge amount of trash and severe traffic jams the festival generates.

In the early days, the event took place for days, but it was reduced to one due to complaints raised by local residents.

In order to cope with the trash issue, about 500 Hanwha employees voluntarily pick up litter when the festival ends.

While critics label the fireworks festival as a mere marketing stunt for Hanwha’s explosives division, others say that the group does not have to spend a huge sum of money to promote itself because it makes money from business-to-business deals.

It costs between 4 billion ($3.7 million) and 5 billion won to cover the fees for the cost for the general production of the festival, according to a source at the company who wanted to remain anonymous as per Hanwha’s policy on releasing this information.

Since the festival involves music, flamboyant lights and thunderous sound effects, it is also easily influenced by current affairs.

According to Kim, the festival has been canceled three times during Hanwha’s history: when the Sept. 11 attacks happened in New York City in 2001; when severe acute respiratory syndrome (SARS) hit Asian countries in 2004 and when North Korea threatened to turn Seoul into a sea of fire.

“When SARS hit Asian countries, we had already paid up all the costs for the festival but had to cancel it because the situation was serious and we had to stop people from gathering in a confined space,” said Kim.

This year’s festival has come to an end, but the fireworks team at Hanwha has already begun to organize next year’s festivities.

“We prepare for the next one right after this one ends,” said Moon Bum-suck, a manager responsible for the fireworks festival. “Otherwise, it is hard to invite famous teams next year.”

Moon joined Hanwha’s research and development department to develop a rocket launching system in 2000, but when he attended the 2008 fireworks festival he changed his career path.

“I went to the Han River to see the fireworks festival and made up my mind to transfer to the fireworks department,” said Moon, who grew up thinking that he would makes missiles when he became old enough to work.

“I saw the faces of people who were staring at fireworks, which were glowing and beaming with joy,” said Moon, when asked what aspect of the fireworks festival captivated him.

“You know, it is hard to please people with explosives,” Moon continued.

“They are used mostly for economic growth and some are used for military purposes, but they are not always used for a good deed.”

Since 2008, the 41-year-old Moon has been working for Hanwha’s fireworks team and takes pride in developing its pyrotechnics.

It may seem like Hanwha’s cultural sponsorship activities are focused on its fireworks festival, but the group also does much work sponsoring city-run orchestras.

Hanwha organizes several classical concerts for the public so that ordinary people can get wider access to these types of performances at economical prices.

First started in 2000, the event invites city-run orchestras to Seoul and runs a festival for days every April or March at Seoul Arts Center, located in Yangjae-dong, southern Seoul.

“There are about 18 city-run symphony orchestras across the nation,” said Kim, the head of the public relations team at Hanwha.

“Since they are qualified to perform in Seoul, we’ve been inviting them to the city so that they can present their music to wider audience.”

Another well-known Hanwha program is its series of 11 a.m. concerts that have run monthly at Seoul Arts Center since 2004.

For those who find it hard to understand classical music, the regular concert features a commentator.

The most expensive ticket for the show starts from 25,000 won and includes a cup of coffee and baked goods.

Tickets for this month’s performance are available through Seoul Arts Center’s website or call center.

If the 11 a.m. concert is designed to make classical compositions more accessible to a broader audience, another performance organized by the group is for those who are ardent fans of this type of music.

The new project started last year. It invites heavyweights in the classical music scene to perform in Korea.

Last year, Helmuth Rilling, a German choral conductor who is often dubbed a master in Johann Sebastian Bach’s music, visited Seoul as part of the series.

This year, Rinaldo Alessandrini, an expert in Italian baroque music, will stage concerts on Nov. 24, 25 in Daejeon and Seoul.

Since the concert is organized by Hanwha, the most expensive ticket is nearly half the price of other classical shows featuring high-quality musicians.