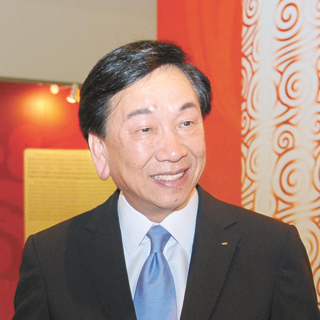 
The International Boxing Association (AIBA), which sanctions amateur boxing matches in several countries, has announced it will move ahead with a plan to provide a path for professionals to compete in the Olympics.

AIBA Pro Boxing had its first matches in October and the association held its annual congress on Wednesday at the Jeju International Convention Center on Jeju Island.

AIBA Pro Boxing is the brainchild of Wu Ching-kuo of Taiwan, who became the president of the association in 2006.

He has been a member of the International Olympic Committee since 2008 and has been on the IOC executive board since 2012.

A. It is part of an endeavor to maintain an environment of fair competition without any manipulation. The only option for boxers after finishing their AIBA boxing careers was to join professional organizations, where they would have no development.

So you are giving amateurs a chance to keep boxing after the Olympics?

That is exactly what we are doing. After winning medals, they can extend their boxing career by going to World Series Boxing [AIBA’s semi-pro league] or AIBA Pro Boxing.

So we also will change the statute to extend the age cap of boxers to 40 from 34, so they now have six more years.

Some have criticized the AIBA for opening another pro-boxing league.

We have separate programs. But the difference is that we look after boxers, while other organizations do not have development programs. How could you have top boxers without them? To build a building, you need a foundation. The foundation is needed because they need to start at a very young age to become top boxers.

Are there any problems financing the AIBA Pro Boxing?

That is why we made the Boxing Marketing Arm [BMA]. They are in charge of marketing and work as the television agency. The arm is enough to develop AIBA Pro Boxing. It is hard to tell whether Pro Boxing will be successful because we just began it in October. But the CEO of BMA is working on sponsorship, marketing, development and TV sales.

What is the goal of launching the AIBA Pro Boxing? Is it to let the best boxers fight in the Olympics?

Why do we give gold medals? They represent the best boxers and best athletes. The Olympics is for top athletes to compete. What is the value of the medals if gold medals are given to third-class boxers? It will also improve boxing’s position in the Olympics, though it is already at the top and a highlight of the Games.

Boxing is getting less and less popular in Korea. What is your outlook for the AIBA Pro Boxing here?

Boxing went down because there was no leadership. Good leaders are just like a captain of a ship. He will tell you which direction the ship goes or you will be lost in the ocean. I must say you now have a very good captain, Mr. Chang Yoon-seok, the president of the Boxing Association of Korea.

I also told Chang to bring World Series Boxing back. Once you have it back, you can recruit many good boxers, and they will grow very fast as they get hard training, good competition, international exposure and experience.

What is your No. 1 principle as the president of AIBA?