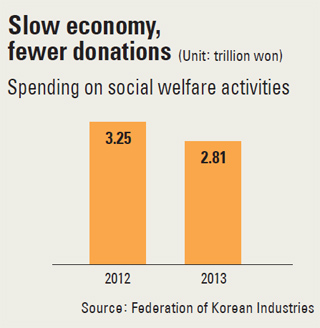 Total spending on social contributions last year by the nation’s top companies decreased by 13.6 percent from 2012, mainly due to the lagging economy, a report by the Federation of Korean Industries (FKI) said yesterday.

The FKI said it surveyed 500 of Korea’s biggest companies about their social welfare activities, including donating funds and running programs to give back to the community. The 234 that responded reported spending a total of 2.81 trillion won ($2.56 billion) in 2013, down from 3.25 trillion won the previous year.

But according to the report, the companies’ pre-tax profit in 2013 decreased by an average of 22 percent over the year before. It added that some large-scale welfare projects such as building new hospitals had been completed in 2012.

For comparison, the top 331 Japanese companies spent only 1.77 percent of their pre-tax profit to benefit society last year, the FKI said.

“When the [2008] financial crisis hit the world, many companies in the United States and Japan reduced their spending on social welfare, but Korean companies haven’t reduced the amount [of spending] regardless of their financial conditions,” said Prof. Jeong Moo-sung from the department of social welfare studies at Soongsil University.

FKI said that Korean companies have given back in a variety of ways. Samsung Group runs a program called Dream Class to share its business management strategies with small companies. SK Group has provided free meals to hungry people and has also given employment opportunities to people in low income brackets.

“Previously, Korean companies tended to just donate money or give away daily necessities, but now they want to improve society with their contributions,” an FKI spokesman said. “And since the public these days cares what companies do for society, they try to carry out more diverse programs to improve their reputation among consumers.”