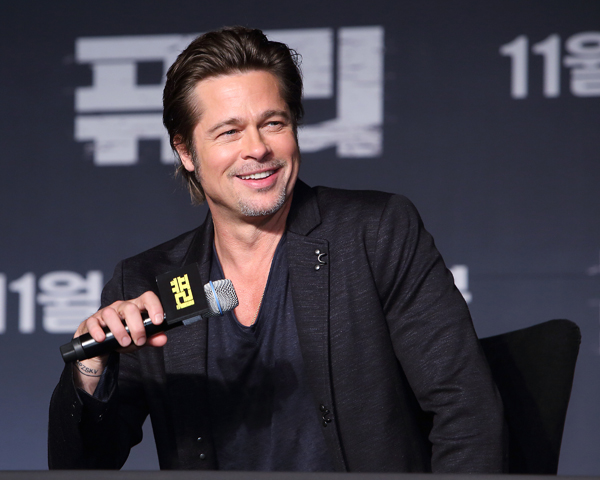 Pitt plays Wardaddy, center, the commander of a crew who put up a brutal fight against the Nazis in the final year of World War II. Provided by Sony Pictures

It is Pitt’s third time in Korea after visiting for “World War Z” last year and for “Moneyball” in 2011.

Despite his frequent trips here, dozens of local reporters gathered at a press conference for the movie held yesterday at Conrad Hotel in Yeouido, western Seoul.

“Fury” which Pitt also produced, depicts the reality faced by U.S. soldiers against the Nazis in Germany during the last year of World War II. It aims to reveal the “accumulative damage to the psyche of men and women” who went through war, according to Pitt. 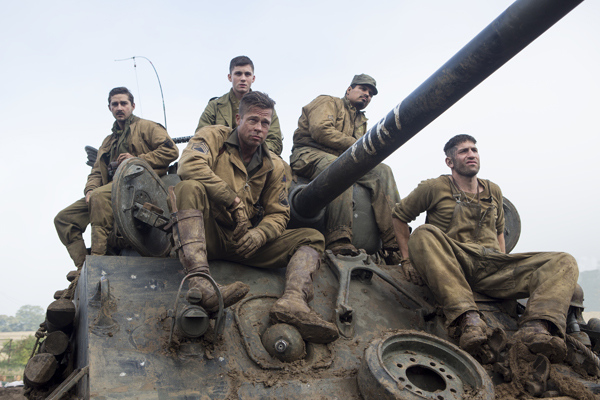 Brad Pitt talks about his latest war-action movie “Fury,” which he also co-produced, at a press conference held yesterday at Conrad Hotel in Yeouido, western Seoul. He was joined by one of his co-stars, Logan Lerman. The film rolls out nationwide on Thursday.Provided by Sony Pictures

In the film, Pitt plays Sergeant Wardaddy, a hardheaded U.S. tank commander in charge of four soldiers. They are placed in a situation in which it seems impossible to survive, having to deal with countless German soldiers with just one tank and limited equipment.

“We were like a big dysfunctional family in the film and we got pretty close to each other working together inside a tin can,” Pitt said, explaining what it was like to work with the other four male actors, including Shia LaBeouf and Logan Lerman.

Lerman is also visiting Korea to promote the movie.

There are moments that rattle the soldiers, but under the strong leadership of Wardaddy, the bond between them stays strong throughout.

“I was responsible for the guys and their morals,” explained Pitt about the strong guidance he showed in the movie.

“But he [Wardaddy] does that in a very strict and stern tone because there is no time to second guess … and he can’t show his weakness.”

Pitt who is the father of six children, said his role has helped him in real life as well.

“As a commander, you have to play a position of a father. I would say that my experience with these guys has made me a better father at home.”

When asked about his role as a producer in the latest film, Pitt had a humble attitude, saying he was more of an “honorary producer” and that “Fury” director, producer and screenwriter David Ayer took a strong lead.

However, he also admitted that participating in the whole process of filmmaking enthralls him.

“What I love about producing is that you build the concept and script of the film as an artist,” said Pitt.

“You follow all the way from beginning to an end, and I think that is a really big privilege.”

Pitt also said that as a head of his own production company - Plan B - he is more interested in making small films that convey a resonating messages rather than the big commercial films that Hollywood is churning out these days.

“Films about difficult and complex subject matters weren’t getting any helping hands so we tried to support them,” he explained.

“It needs a little push over the hill, but we focused on the people and the story we respect.”

In addition to having a special fondness for Korean food, especially barbecue, Pitt said that his multiple visits to Korea are owed to the rapidly growing Korean culture market, including the domestic film industry.

Pitt and Lerman were at a red carpet event yesterday evening at Times Square in Yeongdeungpo District, southwestern Seoul.

The film opens in cinemas nationwide on Thursday.