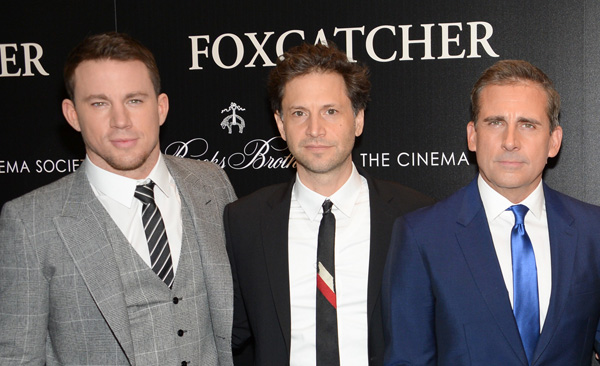 NEW YORK - Over a plate of pasta, Bennett Miller is trying to explain how a movie goes from an idea to an actual thing.

“When you get hooked onto something like the notion of ‘Foxcatcher,’ for me, there is a very strong, specific feeling about the soul of this film, in the same way you might know a person or that you might know a film that exists, to have that sense of WHAT IT IS,” says Miller. “But it’s still not a material thing yet, and how to realize that thing, how that soul gets incarnated is the process.”

For nearly seven years, Miller hunted his latest film, a modern Greek tragedy based on the true tale of two Olympic wrestlers, Mark and Dave Schultz (Channing Tatum, Mark Ruffalo), taken in by a wealthy benefactor, John DuPont (Steve Carell). The project died at least once. Miller was at one point sued by the original production company. And after “Foxcatcher” did finally come together, thanks to its own wealthy patron (producer Megan Ellison) Miller took a year to edit.

Speed, you might say, is not one of Miller’s attributes.

But Miller, 47, is doggedly determined (“I never thought it wouldn’t happen,” he says of “Foxcatcher”), and when he picks up on the scent of a film, his pursuit is steady and deliberate. “Foxcatcher,” for which Miller won best director at Cannes, is a sensational tabloid story that Miller first learned about from a newspaper clipping, but crafted with a solemn disaffection and heavy themes of America.

Carell, who was layered with makeup and a prosthetic nose for the role, recalls his first meeting with Miller:

“He painted a picture of the movie that was vivid, that was incredibly detailed even at that early stage,” says the actor. “Years later when I saw it for the first time, it was exactly as he described it to me.”

Filmmaking is by its nature an accumulation of details, a synthesis of a million decisions. But few directors combine such obsessive meticulousness with a desire to let a film grow organically.

“It’s like he constructs this great Olympic-size pool with an incredible diving board,” says Dan Futterman, a longtime friend of Miller’s who wrote Miller’s 2005 breakthrough, “Capote,” and co-wrote “Foxcatcher.” “But then he wants to walk out there with the actors and jump off.”

It’s a way of working that has meant many nights of painstaking labor, subtly molding a film through sound design and observed moments. To get a fleeting shot from the perspective inside DuPont’s mansion, for example, Miller digitally created the distorted effect of peering through old, warped glass, since capturing the real thing would have meant moving the camera.

Before Miller arrives for lunch at an Italian restaurant near his Manhattan apartment and which bears his picture on the celebrity-covered walls, owner Emilio Ballato promises: “He’ll be here. He’s always here on time.” When Miller arrives three minutes late, he apologizes sincerely for his tardiness.

Miller speaks a little like his movies, shaping his answers, searching for them and pausing for silence. For a filmmaker who specializes in tales of dislocation - a New York poet working on a tour bus (Miller’s documentary “The Cruise”), a statistician among athletes, a New York intellectual in Kansas, a wrestler at a lavish estate - he looks right where he’s supposed to be.