SC under fire for transfers

SC under fire for transfers 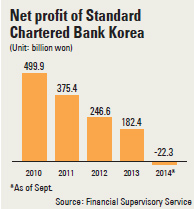 Rumors about outflows of state wealth from foreign financial institutions are circulating across the industry after a local newspaper reported that Standard Chartered Bank Korea was found planning to transfer more than 1 trillion won ($911 million) to its London headquarters.

According to the report on Thursday, the Korea branch of the British financial group has been planning to send about 1.2 trillion won as dividends to its headquarters by March. But the report pointed out that the branch has been experiencing falling net profits in the country recently.

The Financial Supervisory Service (FSS) discovered the plan in its inspection of the bank that started Monday.

“There is no detailed plan on dividends - when or how much will be paid - yet for this year,” the bank said in an official statement released yesterday. “As the largest foreign direct investor in the Korean financial industry, Standard Chartered Bank Korea will maintain both retail and corporate banking businesses in Korea.”

The Korea branch is concerned about the negative media reports because it was already suffering due to rumors that Standard Chartered will pull out of the country due to falling profitability, a possibility the bank has strongly denied.

“Since 2005, SC invested a total of 4.6 trillion won in the Korea branch and sent 310 billion won as dividends for nearly 10 years,” said Chung Han-young, a spokesman for the bank in Seoul.

The last time the Korea branch offered dividends was in 2012, worth about 120 billion won.

The average annual dividend yields of SC Bank Korea are about 0.7 percent, according to Chung, which may disappoint its shareholders at the headquarters.

The rumors that the bank would leave Korea entirely gained ground after SC Bank Korea started to reduce its number of banks across the country. It closed 24 branches last year. This year, it planned to shut down 50 more based on an agreement with the trade union.

“There are rumors among insiders at the bank that its dividends this year would amount to 1 trillion won,” an official at the FSS confirmed. “So we are just starting to investigate the rumors on the coincidental occasion of the regular inspection on the bank.”

The official said specific amounts for the dividends are not yet known.

Standard Chartered entered Korea in 2005 through an acquisition of Korea First Bank, the No. 1 local commercial bank in the country at the time.

There has been much criticism in the industry, especially from the labor union, saying that the British bank ruined the local bank with its lack of investments and passive sales activities.

SC Bank Korea’s annual net profit has been sliding since 2010, from about 499 billion won to 182 billion won last year. It posted a loss of 22.3 billion won for the first nine months of the year.

The FSS can regulate excess outflows of capital across the border to prevent market jitters.

It is normal for the authority to inspect a money-losing institution if it is found transferring huge amount of capital to other countries.

However, analysts say it is not illegal or unreasonable for a branch of a global financial group to send its own capital to another branch or to its headquarters.

“What Standard Chartered is trying to do is capital budgeting,” said Kim Woo-jin, a senior research fellow at the Korea Institute of Finance. “Global groups tend to redistribute funds among branches in different parts of the world in an efficient way. In simple words, they take money from a money-losing market to a profitable market for future returns.

“This means that SC may have judged that the growth momentum of the Korean banking market will be weakened in the future,” he added.

“But it is understandable the financial authority may be concerned if the amount of capital budgeting gets bigger, which might trigger uneasiness among consumers or companies that are customers of the bank, so the authority is trying to take early measures to prevent such risks,” he said.

There was a similar case at Citibank Korea in May.

The labor union of U.S.-based Citibank’s Seoul subsidiary argued that its former CEO Ha Yung-ku contributed to the “leakage of state capital” by remitting more and more service fees to overseas offices of Citibank and its New York headquarters. It called the fee-paying a form of tax evasion.

According to data from the union, overseas outsourcing service payments by the bank’s Korea subsidiary have been increasing recently regardless of the profitability of the branch.

In 2012, about 91 percent of the subsidiary’s net profit was transferred overseas, the union said.