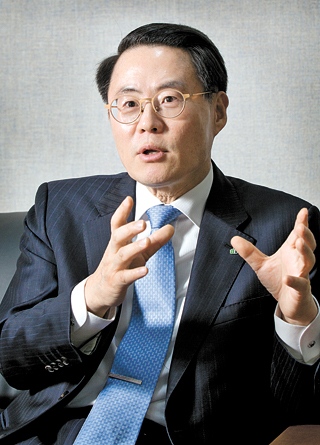 He says the Korean government should prioritize export strategies for agricultural products and food items because the recent Korea-China free trade agreement (FTA) and other FTAs represent significant growth opportunities for quality products.

“The government should think differently about local food and set up two separate policies on local food supplies and exports,” says Kim, who has held his position since 2011. “In the past, exports were just a small part of the agriculture and food industries, because Korea exported only what was left after meeting local demand.”

Kim has 30 years of experience in such areas as rural development, food retailing and free trade agreements.

Q. What kind of export efforts have you made so far? What would you like to accomplish next year?

A. The aT is a quasi-governmental organization, which mostly focuses on the local supply and retail system for food products. But I put most of my energy into shifting our company’s business focus from local work to exports through new projects like the Chinese market and Alibaba.

We opened a section dedicated to Korean food products on the Alibaba website 1688.com at the end of October. Previously, 13 Korean exporters independently sold about 480 processed food items like ramyeon, drinks and snacks. But with this new contract, we gathered them all along with 11 new small and midsize food exporters that joined the Korean food section with additional products like makgeolli (Korean rice wine) and tteokbokki (rice cakes spiced with red pepper sauce). Now, about 870 food products are being sold on Alibaba.

I thought we should go for the online market, especially in large markets like China. It doesn’t make sense to keep marketing our products with one-time offline exhibits in such a huge country, which has a population of more than 1.2 billion.

China’s online market was about 315 trillion won [$287 billion] last year and grew more than fifteenfold over the past five years, and there are more than 600 million Internet users. Studies say 320 million Chinese actually use e-commerce services. If this system settles down and there is a stable consumer group, then Korean food exports will further grow.

Of course, not all Chinese Internet users can be our customers. The mid- to high-income population is our main target, because both fresh and processed Korean foods are widely known for their quality and safety.

I think we could promote our products on television home shopping channels and online malls.

Besides B2B (business-to-business) markets, what has the aT done to explore B2C (business-to-consumer) export markets?

In addition to the global B2B markets, we have done various promotional events since 2012 jointly with one of the largest Chinese B2C online shopping malls, Yihaodian. In this case, marketing events with Korean Hallyu stars really helped.

We featured actor Kim Woo-bin, who gained huge popularity in China with the drama series “The Heirs,” in our offline K-Food promotional event in March this year, which later boosted sales by 74 percent and customer registrations at the shopping mall by 35 percent.

At the end of this year, we also plan to invite product merchandisers specializing in B2C online malls from various countries to connect them with local food exporters. We hope this will further boost our B2C exports, which were 12 billion won last year in China alone.

What about other global markets?

I realized that the consumption trend of Korean food is changing, especially among Westerners.

Among the K-Food Fair events this year in China, Vietnam and the United States, our New York City event was very impressive. People were standing in a long line to try various Korean food made with our locally produced ingredients. They were particularly interested in products like seaweed and red pepper paste, which we previously thought Westerners did not favor.

This changing consumption pattern really shows in the numbers. The largest buyer of Korean seaweed was the United States last year, followed by Japan. It was the first time Japan was not the top seaweed buyer. Spicy red pepper pastes are showing the highest sales growth rate in the United States.

Also, through the partnership with the world’s largest B2B e-commerce company Alibaba, we will increase sales in Southeast Asia, the Middle East, and North and South America.

How should Korea react to the massive inflow of overseas-grown food products, especially as the Korea-China FTA has been settled?

We can’t reject or stop the inflow of foreign food products. What we can do is to generate higher value out of their cheap primary agricultural products by producing quality processed food. If their cheap rice comes into the Korean market, we produce makgeolli and rice crackers out of it and resell them to the world, modeling the Dutch.

Like the Dutch agriculture trade model, Korea also should make good use of neighboring countries. We have tons of opportunity, as Northeast Asia has a population of about two billion, about 30 percent of the total world population.

From now on, trading primary agricultural products will not differentiate us from other countries. We’ve actually seen primary fresh produce exports dropping an average of 1 percent every year, compared to an average 1 percent increase in processed foods.

While boosting processed-food exports, Korea should develop and produce more high-quality fresh produce. For example, the Chinese economy is increasingly maturing and its middle and upper classes with purchasing power show high demand for Korean-grown produce, such as rice and fresh vegetables.