Fashion that is hot - or a bit warm

Fashion that is hot - or a bit warm 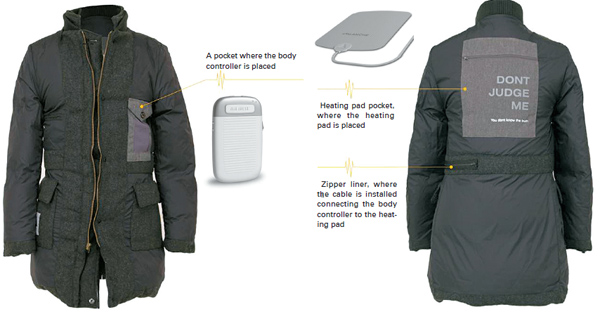 Information technology and the fashion industry have come together to introduce a thermal control device built into garments just in time for winter.

Iriver said yesterday it launched Avalanche last Friday at Lotte Department Store, one of the leading retailers in Korea. Avalanche emphasizes both a heating function and a slim design.

Avalanche garments come with a heating pad, body temperature controller in a pocket and a remote control.

The heating pad installed in the back of the garment provides warmth when the owner turns the controller on and adjusts the temperature.

The controller in the pocket, which supplies power through a cable to the heating pad at the back, can be adjusted up to 52 degrees Celsius (125 Fahrenheit) within a minute.

In developing the product, Iriver said it put the most emphasis on the heating pad. Unlike other heating pad products, Iriver’s doesn’t rely on wires inside, but instead uses carbon fibers.

“As the heating pad is made of soft fabric slightly smaller than a piece of A4 paper, it has almost no risk of damage, even when it’s folded,” said Jung Deok-hee, spokesman for Iriver.

Far-infrared rays, good for the human body, are generated from the carbon fiber.

The weight of the pad is only 70 grams (2.5 ounces) and is easily removed for washing, said Iriver.

A built-in sensor in the controller automatically prevents the overheating and minimizes power consumption.

The company said the pad generates less than 1 percent of the electromagnetic waves of a typical smartphone.

Iriver used a product from Panasonic, which is acclaimed for its safety, in the controller. Owners must charge the controller, which can also be used as a smartphone battery charger.

The remote control is small enough to carry in a bag or a pocket.

“Avalanche is attracting a lot of attention from both the fashion and IT industries as it makes fashionable clothes that add innovative technology,” said Jung. “The designs easily go well with suits or casual clothes.”

Iriver said the collaboration among Iriver, Parsons and Lotte will continue.