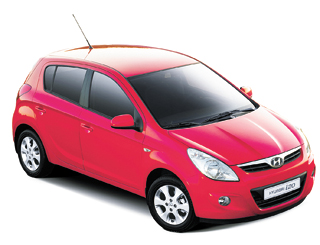 Over the past few years, the top priority for the nation’s leading automaker Hyundai Motor was to produce a car with a strong body. By using high tensile steel plates for the body and installing a series of safety options including an anticollision system that detects the movement of other vehicles and pedestrians on the road, the company said it developed cars that provide “premium comfort.”

But the strategy wasn’t successful because the latest trend in the car industry, led by German brands such as BMW and Mercedes-Benz, is downsizing or reducing the weight of vehicles to increase its driving performance and fuel efficiency. The trend was even followed by luxury car brands such as Ferrari, which introduced the California T in Korea earlier this year. It was the first time Ferrari had installed a turbo engine since 1987, and it increased the car’s fuel efficiency by about 15 percent over the previous California.

But the models released this year by Hyundai, including the LF Sonata, failed to pick up on the pattern. The LF Sonata weighs 3.2 percent more than the previous model, the YF Sonata, which was 1,415 kilograms (1.5 tons). For customers who expect good fuel efficiency from a model that starts at 22.5 million won ($20,500), the Sonata’s 9.6 kilometers per liter would come as a disappointment. In contrast, Benz’s entry-level sedan, CLA CDI 200, has a fuel economy of 16.6 kilometers per liter.

Earlier the month, Hyundai Motor Group Chairman Chung Mong-koo announced that the company will improve the fuel efficiency of Hyundai vehicles by 25 percent by 2020.

Two weeks before, CEO Kim Choong-ho told the media that the company will introduce a small sport utility vehicle (SUV) in the first half of next year. The announcements seem to be a sign that the company has finally decided to respond to customers’ needs - high performance and fuel efficiency at a low price.

The company hasn’t provided details about its new small SUV, but industry insiders said it will be an experimental model for Hyundai’s fuel-efficiency improvement project. The insiders predict it will be similar to the ix25, which the company only sells in China, or the i20, which is sold in Europe and India.

The compact hatchback i20 competes with the Peugeot 208 and Volkswagen Polo in Europe. The i20 is 4.02 meters long (about 13 feet) and the wheelbase is 2.57 meters wide. It provides 1.89 meters of leg room and 326 liters of storage space, making it slightly larger than its two main competitors. The i20 comes in two different engines - 1.2 liter gasoline and 1.4 liter diesel. The 1.4-liter model has a fuel economy of 18.9 kilometers per liter with manual transmission. Hyundai said it had improved the vehicle’s handling with motor-driven power steering and suspension.

Sales of the latest i20 started this month and Hyundai expects to sell more than 100,000 units per year with the goal of bumping its global market share for small hatchbacks up to 3 percent from 2.6 percent. Its starting price is about $17,000. Previous i20 models sold more than 400,000 units in Europe over the past six years.

Hyundai started selling its newest SUV ix25 in September, and sold 3,972 units that month and 6,080 units in October. The ix25 is 4.27 meters long and 1.78 meters wide with the wheelbase of 2.58 meters. It has either a 1.6-liter or 2.0-liter engine. It is 14.8 centimeters longer than Renault Samsung’s compact utility vehicle QM3, but the wheelbase is 1.4 centimeters shorter.

To meet Chairman Chung’s goal by 2020, Hyundai will have to replace seven of the 10 engines in its lineup with new gasoline and diesel engines. Its next small SUV is predicted to feature a Kappa 1.0 turbo GDI engine, which the company developed last month.

“For gasoline, a revamped model of the Nu engine for midsize cars and the Kappa engine for small cars will be introduced,” said a Hyundai spokesman. “For diesel, a new type of engine to replace the R engine will come out.”

The spokesman said the 1.0-liter, three-cylinder turbo engine with 120 horse power and maximum torque of 17.5 kilogram-meters has relatively lower driving performance than the 1.6-liter engine (149 horse power and 17.0 kilogram-meters) installed in Hyundai’s small sedan Avante, but it might be suitable for small SUVs. The starting price for the ix25 in China is 140,000 yuan ($22,800).