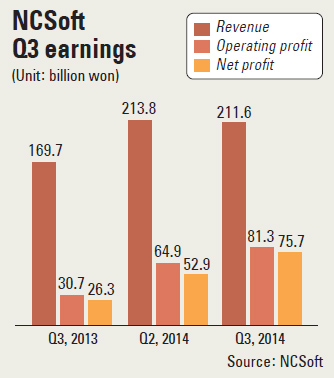 NCSoft saw its operating profit increase 165 percent year-on-year in the third quarter to 81.3 billion won ($74 million) due to lower marketing costs and the popularity of its Lineage and Ion online games.

During the same period, sales rose 25 percent from a year earlier to 211.6 billion won and net profit shot up 188 percent to 75.7 billion won.

According to the earnings report, overseas sales shrank from last year.

In the third quarter, overseas sales were 73.1 billion won compared to 138.5 billion won in domestic sales, while second-quarter overseas sales accounted for 49 percent of total revenue. In the same period last year, they were one-third of total sales.

The company’s increase in profit was largely due to lower operating costs rather than sales growth. Operating costs plummeted to 18.6 billion won from 130.3 billion won in the second quarter, when NCSoft launched the Wild Star game in North America and Europe in June and Guild Wars 2 in China in May.

“At the G-Star game show, which will kick off Thursday, we plan to release a series of new games such as Lineage Eternal and Project Hon,” said Hyun Moo-jin, head of management planning at NCSoft.

“Through the new large-scale, next-generation games with global competitiveness, we will secure a new growth driver.”