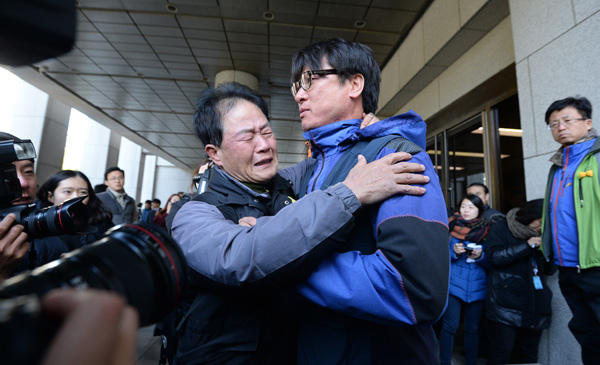 Kim Deuk-jung, head of Ssangyong Motor’s chapter of the Korean Metal Workers’ Union, right, tries to comfort a plaintiff yesterday after the Supreme Court ruled against a group of workers in their wrongful termination suit. [NEWS1]

The nation’s highest court ruled yesterday that Ssangyong Motor’s 2009 decision to lay off 153 workers as part of restructuring efforts was legitimate, effectively ending the unprecedented wrongful termination case after more than 2,000 days.

The Supreme Court yesterday overturned a Seoul High Court ruling that Ssangyong Motor must take back 153 workers fired in 2009 and sent the case back to the court for a retrial. With yesterday’s decision, the automaker’s decision to lay off the workers on June 8, 2009, will remain legal.

The court said that the crisis that led to the layoffs was a structural problem caused by a lack of investments, not a temporary liquidity crunch that could be overcome within a short period of time.

“Determining the size of manpower crucial to run a company and the size of a surplus work force is a managerial decision as long as [those decisions] are reasonable,” the court said. “Unless there is a special circumstance, the judgment of the management must be respected.”

The court also said the company did not intentionally exaggerate its financial woes to lay off the workers. It also said management made enough efforts to avoid the layoffs before eventually firing the workers.

Ssangyong Motor went into court receivership in February 2009 in the aftermath of the global financial meltdown. Its main investor, Shanghai Automotive, pulled out in 2008.

Two months later, the automaker unveiled a restructuring plan that included a layoff of 2,646 employees, or 37 percent of its total work force. Enraged by the plan, its labor union began a strike on April 23, 2009.

The strike lasted 77 days and violent clashes with law enforcement authorities took place at the company’s plant in Pyeongtaek, southern Gyeonggi. In the meantime, 1,904 workers voluntarily retired and 454 took unpaid leave. As of August 2009, 165 workers were formally laid off.

Among those fired, 153 filed a wrongful termination suit against the automaker in November 2010. The Seoul Southern District Court ruled in January 2012 that the layoff was legitimate.

That ruling was overturned last February, when the Seoul High Court ruled in favor of the workers. The high court acknowledged that the company was in hardship including a severe liquidity crunch, but did not accept the automaker’s claim that layoffs were the only option it had at the time.

The automaker was bought by the Indian company Mahindra & Mahindra in November 2010 and it called back all the employees who went on leave without pay to return to their jobs. Since the layoffs, 21 former employees and three wives of the workers have passed away, including some who committed suicide.

After the Supreme Court ruling, about 10 plaintiffs left the courtroom with grim faces. Kim Jeong-wuk, a secretary general of the automaker’s labor union, burst into tears.

At a press conference, Kim Deuk-jung, head of the company’s chapter of the Korean Metal Workers’ Union, condemned the court. “This put nails in the coffins of the workers who were standing on the edge of a precipice of death,” he said. “We’ve barely hung on for the past six years, but the Supreme Court crushed our hope.”

Kim Tae-wook, a lawyer for the plaintiffs, called the ruling “unconvincing, cruel and irresponsible.” He said he will present new evidence at the retrial in the appeals court.

Ssangyong Motor yesterday said it welcomes the Supreme Court’s ruling that acknowledged the legality of the layoffs. “It was an unavoidable choice to save a company that was on the brink of bankruptcy,” the company said. “The layoffs were carried out legitimately and legally and the Supreme Court recognized it.”

The ruling is expected to influence the National Assembly’s attempt to revise the Labor Standard Act. Lawmakers submitted a bill last year to strengthen the requirements for a management’s decision to lay off workers.

While the current law allows a company to fire workers for an urgent managerial need, the revision seeks to make companies avoid layoffs unless they cannot continue in business.