Debt highest for people in their 50s

Debt highest for people in their 50s 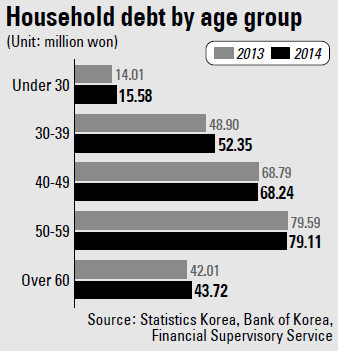 Self-employed people in their 50s had the highest household debt this year, according to a report released yesterday by Statistics Korea.

Statistics Korea, Bank of Korea and the Financial Supervisory Service surveyed 20,000 households nationwide at the end of March in “2014 Household Finance and Welfare Survey Results.”

The results showed that seven out of 10 households of people aged 30 to 59 have debt, along with more than half of households aged under 30.

Debt among self-employed people was the highest, averaging 89.95 million won, and 74.4 percent of all self-employed were burdened with debt.

According to the survey, 59.1 percent of all households in Korea are in debt, and 71.8 percent said they were finding it difficult to repay, an increase of 1.6 percentage points from a year earlier.

“Although the interest that households pay has been reduced as interest rates fell last year, the actual proportion of principal payments has increased from last year with low net incomes,” said a spokesman for the Bank of Korea.

As a result, average consumption per household only increased 0.2 percent year-on-year, while average household income increased 4.4 percent from a year earlier.

“Even though their income increases, they spend it paying off interest on mortgages and repayment of principal,” said the spokesman.

According to the survey, average annual consumption per household was 23.07 million won, with spending on food and beverages accounting for the biggest portion at 6.33 million won. Medical expenses increased the most year-on-year, by 6.8 percent.

Average assets per household increased 2.1 percent as of the end of March this year over a year earlier, while average debt rose 2.3 percent.