Sun and seafood to ring in the New Year

Sun and seafood to ring in the New Year 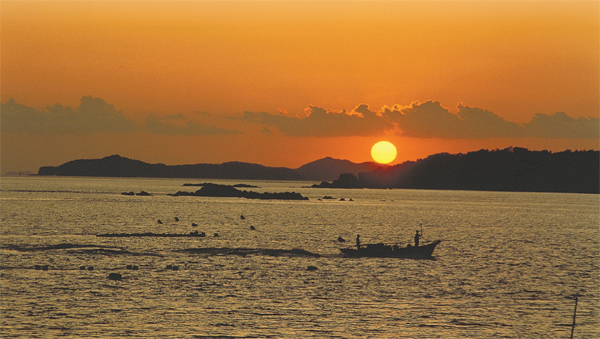 A fishing boat sails on Korea’s West Sea as the sun sets. Provided by the Korea Tourism Organization

SEOCHEON, BORYEONG, TAEAN, South Chungcheong, and BUAN, North Jeolla - In the coming weeks, most people will begin planning ways to ring in the New Year. Others may travel to Korea’s coastal areas to watch the sun rise and wish for good things to come in the year ahead.

But why wait until January to witness the sun in action? Before New Year’s Eve, take some time, appreciate the pink sky and use that time to reflect and lay out ambitious resolutions for 2015.

Besides, the activities available in the western coastal region during the fall months - when crab and shrimp are both in season - will make any trip to the area all the more memorable.

In the coastal areas, there are some breathtaking landscapes, and it’s possible to watch the sun set over a clear horizon.

Masil Trail, also known as Masil-gil in Korean, near Byeonsanbando Peninsula in Buan, South Jeolla, is a great place to walk around. There are eight different routes, with the third generally considered the most scenic. 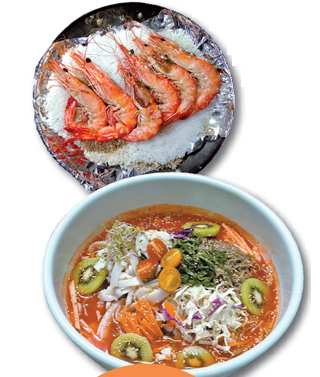 Top: Grilled shrimp on top of a thick layer of salt. The ones captured out at sea have longer whiskers than the ones raised in captivity. Above: Moolhoe, which roughly translates to raw seafood dipped in water. Squid is chopped up and mixed with vegetables and fruit in a spicy sour sauce. By Lee Sun-min

The third route stretches about seven kilometers (4.3 miles) and follows the coastline from Gosapo Beach to Gyeokpo Port. It takes about two hours to walk from one end to the other. Along Jeokbyeokgang River, one of the most popular spots along route No. 3, walkers can observe an array of scarlet colors running across the evening sky that reflect onto the rocks above the beachlines.

There are only a few spots toward the West Sea where travelers can appreciate magnificent sunrises and sunsets.

Maryangpo in Seocheon is the most popular destination among nature enthusiasts and is a great place for a two-day getaway.

The sunrise is generally more vivid during the winter months due to the trajectory of the sun, which moves toward the south, providing a clearer view. It still might be tough to see the sun above the horizon. Maryangpo is located just on the tip of a small peninsula, which only spans so far.

Thanks to its unique geographical location, the city holds a sunrise-sunset festival every year from New Year’s Eve to the morning of Jan. 1. Attendees gather to appreciate the sunset, followed by some nighttime performances and the countdown to the New Year. A massive campfire adds to the rustic atmosphere of the festival, and attendees also have the option to release balloons and make a wish.

For more information about the festival and Seocheon, go to sunrise.invil.org or call (02) 733-5901.


Check the time and tide

Do some research before a trip to the West Coast, and always remember to check the ebb and flow of the tide. High or low tide can differ from one day to the next, so check the tide schedule so as to not miss any spectacular seaside activities.

At Muchangpo Beach, travelers can observe a phenomenon known as the miracle of Moses, when the seas split back to form a roadway straight through the ocean. The underwater pathway mostly forms at the middle and end of each month based on the lunar calendar. Ask for an exact schedule from local hotels near Muchangpo Beach.

One of the West Coast’s most well-known activities involves mud - and lots of it. When the tide is low, visitors can walk out onto the mud paddies, which are positively filled with clams and crustaceans.

From left: An aerial view of Daecheon Marine Product Market, which boasts a variety of fresh seafood; Nearby Daecheonhang Port; Visitors dig for clams at Muchangpo Beach. Provided by the Korea Tourism Organization

A pair of rubber boots is essential to keep your feet from getting too wet and a pair of cotton gloves will protect your hands from being scratched or cut while digging. Be sure to bring a bucket to collect the plethora of marine products dug out of the ground.

Travelers can find a variety of different kinds of clams, from those in heart-shaped shells to those housed in what look like long squares. Some are more rare than others and it’s possible to find varieties not sold in local supermarkets.

Yongsin Village in Taean is one of the lesser-known mud paddies, suitable for families and groups who wish to avoid the crowds. The ground here is relatively firmer than in other places, as there’s more sand in the area. This mud-filled experience costs 9,000 won for adults and 5,000 won for children. 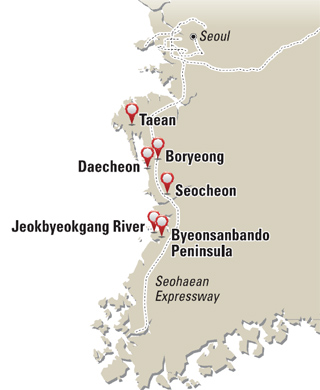 This village also offers another unique experience visitors won’t find elsewhere - fishing within the dock. During ancient times, when fishermen had limited resources and skills, they would often build up the sea bank with large rocks during low tide so that the marine products that flooded inland during high tide would get trapped.

This formerly common fishing technique, called doksal in Korean, has mostly disappeared nationwide, but there are a couple of banks still left in the village on which visitors can experience it. This is a great activity for children and meaningful to those in the older generation who want to relive a part of their youth. Inside the dock, visitors can usually catch gray mullets, Spanish mackerel, anchovies and shrimp. The fee for adults to participate is 20,000 won.

Nearby Mandae Village also offers a similar experience. Here, digging through the mud costs about 10,000 won per person, and it’s 20,000 won for doksal fishing. Children pay 15,000 won. Fish caught in doksal programs may be cut up and served raw for free upon request.

The village also offers fishing in the deep sea. For up to four hours, participants can catch rockfish, halibut and trout. All fishing gear is provided. Bring an icebox to carry your catch back to dry ground.


Fill up your stomach

One of the best reasons to travel to the West Coast is the high-quality seafood. Two of the freshest and most popular items in the cold season are the crab and shrimp.

Although spring is when crabs are the tastiest, fall is well known for larger crabs with more meat. Enjoy cheap, quality crabs at local marine markets, or buy some from vendors and have them cooked at a nearby restaurant.

Price usually varies based on the size of a crab and weather conditions. Larger ones are typically 30,000 won per kilogram.

When this reporter was shopping for crabs in Daecheon Marine Product Market on a recent morning last month, a kilogram was 35,000 won. According to the vendors, it had rained the night before, making a trip out to sea difficult and limiting the day’s haul.

One kilogram is equivalent to three to five crabs, which can be shared between two people or among three people. Restaurants will cook the crab and supply patrons with silverware and the basics for about 10,000 won.

The price for shrimp differs greatly depending on whether they are caught live in the water or raised in captivity. Wild shrimp usually have longer whiskers - sometimes twice as long as the average finger - and the tips of their tails are darker in color.

While most residents grill them in a pan filled with a thick layer of salt, visitors may want to try eating them raw, especially the live ones.

If you dare, peel the shell and eat the body without seasoning. The sweet, savory taste will have your taste buds tingling.