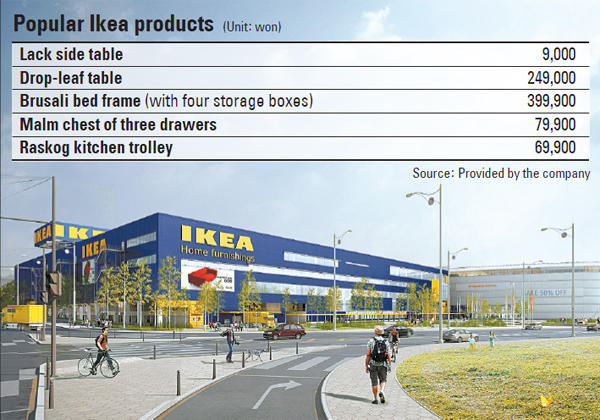 Ikea’s store will be near Gwangmyeong Station, Gyeonggi. Provided by Ikea

Ikea Korea, the local branch of the Sweden-based home furnishing company, unveiled catalogs and prices yesterday for more than 8,000 items on its website in advance of its scheduled opening on Dec. 18.

The furniture, toys and other items listed on the website will be available only at the Gwangmyeong store. Delivery charges start at 29,000 won ($26), and assembly is available starting at 40,000 won.

The prices are comparable to those of other Ikea websites overseas.

For example, a Lack side table goes for 9,000 won, while the English-language Ikea site charges $9.90.

Korean consumers appear to be eagerly awaiting the store opening, with “Ikea” emerging as the most popular search term yesterday on Naver.

But some voice concerns that the internationally-known home furnishings company will be a serious threat to small and independent local furniture businesses.

Ikea Korea said it will showcase store items in advance of the opening in events called “Hej Home! My Home!” starting on Nov. 19 at Seoul Station, Nov. 20 at Daegu Station and Nov. 21 at Busan Station.

Visitors can get acquainted with some of the furniture and accessories by Ikea for their living rooms, bedrooms, laundry rooms, offices and kitchens.

As of last year, Ikea had 345 stores in 42 countries. The company’s most recent store openings in Asia include two in China - in Shanghai’s Baoshan District and Ningbo in Zhejiang province.

Europe has the most Ikea stores with 248, followed by North America with 50 and Asia with 30.