Seoul, Gyeonggi get a dusting of early snow

Seoul, Gyeonggi get a dusting of early snow 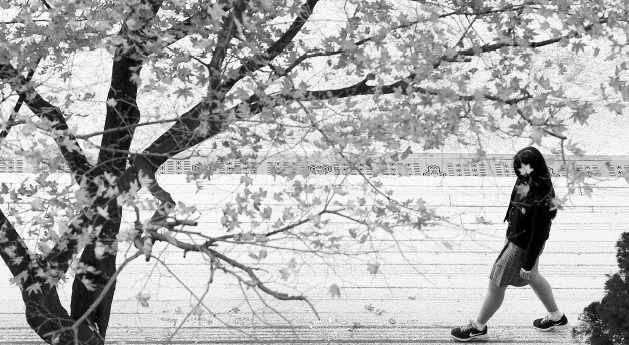 Seoul and surrounding areas in Gyeonggi had their first snow this season early yesterday morning, which began to fall at around 3:40 a.m. and lasted for about 30 minutes.

Some parts of Gyeonggi saw snowfall well into yesterday morning.

The snow came four days earlier than the capital’s first snow last year, but the weather watchdog said the city will not have any snowfall over the weekend.

For the weekend, the state-run Korea Meteorological Administration forecast that the temperature in Seoul will go down to minus 1 degree Celsius (30.2 degrees Fahrenheit) this morning and climb as high as 10 degrees in the afternoon - more than a 10 degree gap.

The weather forecaster advised people to heed the difference and dress appropriately.

Busan will stay much warmer today with its lowest temperature at 5 degrees Celsius and its highest at 14 degrees.

From Sunday afternoon, the country will be under heavy clouds and rain will fall nationwide and continue through the next day, according to the state-run institution.

Seoul is expected to have a warm Monday morning, with its lowest temperature at 5 degrees Celsius, but the cold will return the next day with the temperature expected to drop to 1 degree Celsius.