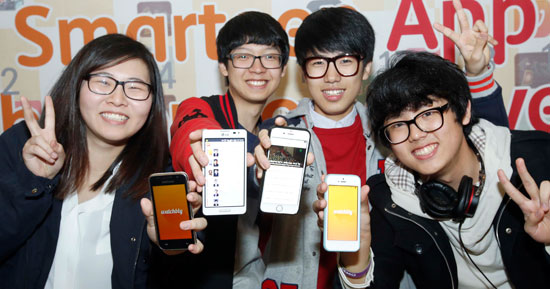 A number of applications appear when gukhoe, the Korean term for the National Assembly, is entered into mobile app stores.

But what stands out among them is Watchbly, which attracted 500 downloads in just 10 days after it launched in September. It has currently seen about 1,000 downloads.

Upon opening the application, real-time news fills the front page. At the top of the screen, the top three legislators who have proposed the most bills appear, and on the left side of the menu there is a “legislator transcript,” which ranks lawmakers according to the number of bills they have proposed.

If a user clicks on a legislator’s name, information about the lawmaker pops up. It includes party affiliation, number of terms and contact information, among other facts.

Users may also send a petition to a lawmaker by selecting the “email petition” option at the bottom of the official’s page.

With that, Watchbly aims to literally watch over legislators and hold them accountable for their actions.

Yoon, 17, acted as the principle planner and came up with the idea in April as the National Assembly’s provisional session was ongoing.

“I felt bad every time I saw an empty National Assembly hall, or legislators arguing or shouting at the media,” Yoon said. “But then I thought: Would attendance rates and bill proposals increase if citizens watched over them?”

The idea earned the team the grand prize at the 2014 Smart Teen App Challenge, held on Nov. 4 at Pangyo Techno Valley in Bundang, Gyeonggi.

The contest, co-hosted by the Small and Medium Business Administration and SK Planet, drew 425 teams from 101 high schools. Twenty teams received awards on that day.

“This is an app that I concentrated on while picking up abandoned cats around my school,” Yoon said. “I provided information on cat food, their characteristics as well as a breeding diary that users can use.”

The team pooled research from the Internet and also consulted with veterinarians for the app, which has had 500 downloads so far.

Cats In Me also includes a function that allows users to search for nearby animal hospitals.

“I received requests to make apps for other kinds of abandoned animals, too,” Yoon said. “I’m considering making it a long-term project.”

Meanwhile, Yoon Sang-ho is in talks to add a special section in Watchbly that would enable users to watch real-time video broadcasts of a regular National Assembly session.