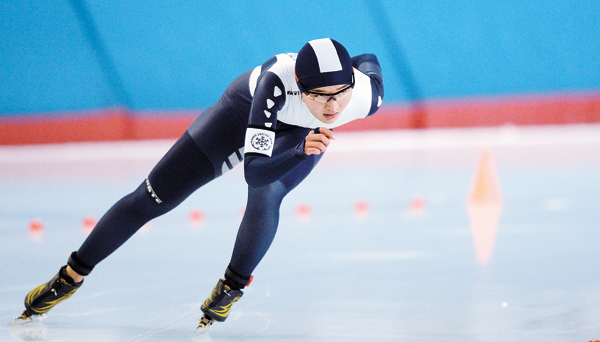 Once a short-track speed skating gold medalist, Park Seung-hi could become a threat to previously unrivaled Lee Sang-hwa less than a month after making her second ice rink debut, this time in long-track skating.

At the International Skating Union (ISU) Speed Skating World Cup in Obihiro, Japan, on Sunday, Park finished the women’s 500-meter long-track Division B race in first place, clocking 39.05 seconds. She earned a total of 44 points from two 500-meter races and was ranked 14th among 34 skaters. She ranked second out of Division B skaters, which means she will move up to Division A in the second round of the World Cup in Seoul on Friday.

Park’s improvement means she is closing in on two-time Olympic champion Lee Sang-hwa, who renewed her 500-meter world record five times. Lee finished the race with a time of 37.93 seconds, grabbing her 10th consecutive World Cup victory. But the gap between Park and Lee’s times is narrowing, from 1.66 seconds apart in the first qualification race on Oct. 29 to 1.12 seconds on Sunday.

“It takes years for other skaters to shorten their records by one second,” said Park’s Coach Jo Sang-hyeon, 26, who helped her switch her focus from short-track competitions to long races. “She also pulled it off in Japan, which has worse [skating] conditions than the United States or Canada.”

Park won two gold medals in the Sochi Winter Olympics in February, but she started at the very bottom of long-track skating after announcing her plan to enter the sport in August. In an interview with the JoongAng Ilbo on Nov. 6, she said she wanted to compete to break her own records in longer races instead of fighting to get ahead of other players on tight corners in short-track skating.

It was a challenge for Park, given that the skills, form and time management are completely different from short-track skating.

“I thought I would easily adapt to long-track speed skating because I trained myself for short-track races for the past 10 years,” she said. “But it wasn’t. I thought I was strong enough, but it wasn’t true.”

Still, she tackled the challenge head-on. She practiced for eight to nine hours a day, starting with the very first positions that children learn.

Park has also doubled her weight training because acceleration is essential for long-distance skaters.

With the combination of building muscle and the corner work, Park has learned from short-track skating, which has helped her adapt to long-track conditions, said her coach.

She is now working on starts, because short-track races start off slower. She set a personal record -100 meters in 11.05 seconds during the 500-meter race on Sunday - which was the slowest among all the skaters. But it means there is room for improvement.