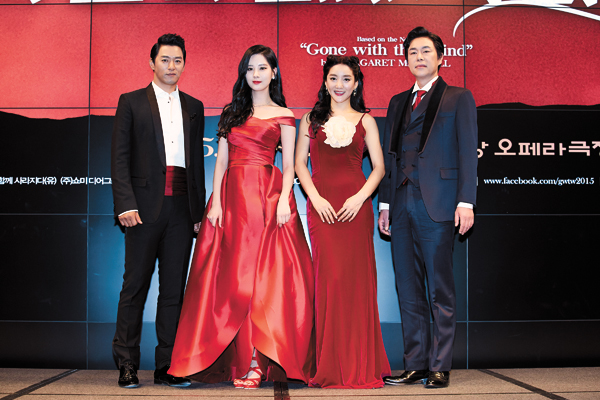 It’s been nearly five years since producer Park Young-seok decided to stage the musical “Gone with the Wind” in Korea after seeing the original in France, mostly because of issues over casting.

It doesn’t usually take that long for a musical to be adapted into a Korean production, but it was difficult to reach a consensus with the French team that owns the copyright, according to the Korean producers.

“The image of the characters had to correspond with those in the 1939 film ‘Gone with the Wind,’” said Park, explaining that a lack of black actors in Korea due to the nation’s homogeneity made it difficult to cast the roles of the African-American characters in the musical.

“Gone with the Wind” is set during the American Civil War period when the enslavement of African?Americans by white plantation owners was rife.

“The message the musical tries to deliver is of freedom and equality,” said Park.

For roles such as Mama (also known as Mammy), the production team auditioned black actors and contacted entertainment agencies to find suitable talent. However, as they were drawing from such a small pool of people, it was difficult to find those who “corresponded to the images in the movie, who could sing well and act at the same time,” said Park.

In the end, the production teams from both countries decided that Korean actors would take on the African-American roles.

Other roles have been cast after attempting to find actors that resemble the characters as closely as possible. Actor Joo Jin-mo has been picked by the Korean producers as Rhett Butler and will be making his musical debut. Musical actor Kim Pub-lae will alternate the role with Joo.

As for Scarlett O’Hara, the lead, one former and one current girl group member has been picked by the production team. Bada, a former member of girl group S.E.S, who has been active as a musical actor in recent years, will alternate the role of Scarlett O’Hara with Girls’ Generation member Seohyun, who said she has been “dreaming of this role.”