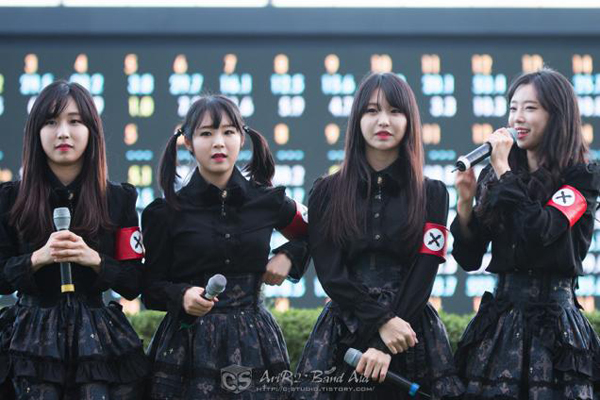 Four-member girl group Pritz is in the middle of controversy after wearing stage outfits with logos that people say resemble the Nazi’s swastika symbol.

Before the controversy, girl group Pritz was just an obscure K-pop band that had debuted in the music scene in April.

The group had been promoting their newly released digital single “Sora Sora,” which came out earlier this month, but they failed to capture the attention of K-pop fans until a performance at a horse racetrack in Gwacheon, Gyeonnggi, earlier this month.

At the event, the members wore armbands bearing an X-shaped black cross, which many people on social media associated with the Nazi symbol.

The controversy went viral after The Wall Street Journal reported on the girl group’s stage outfits on Thursday.

After the report was published, the girl group’s name stayed at the top of major web portals’ most-searched lists during the weekend.

Responding to the controversy, Pandagram, the girl group’s agency, said, “The logo was inspired by a speed-limit sign and it symbolizes hope of the four girls who wish to grow up like the X shape.”

The agency added, “We will soon modify the girl group’s music video,” in which the members of Pritz wear the problematic armbands.