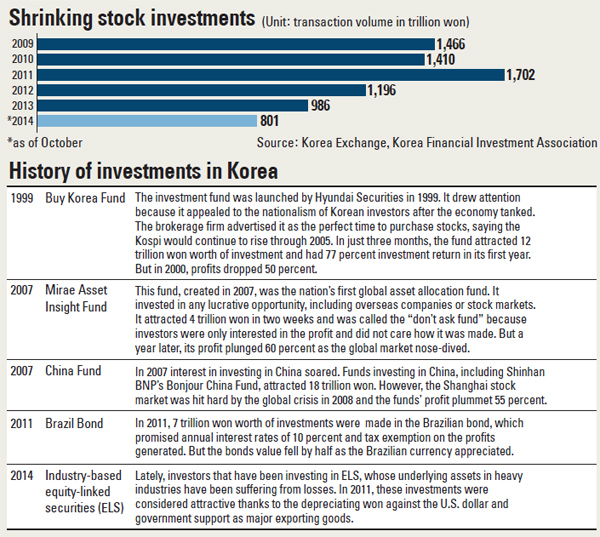 The retiree decided to make safe investments, putting the money into financial products with low risks and low returns. Instead of making huge profits from risky investments, he wanted a stable income like the one he received when he was still employed.

He put 2 billion won into real estate, including small retailers in provincial areas. He put another 1 billion won into an insurance product from which he collects a monthly allowance. And with the remaining 1 billion won he bought stocks in Samsung SDS, which went public on Friday. He purchased 40 shares worth 7.6 million won.

Yoo said he is also considering investing in Samsung’s de facto holding company Cheil Industries, which has scheduled its IPO for later this year. 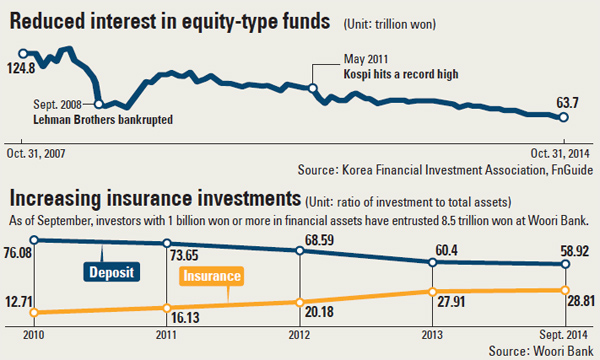 But the one place he has no interest in putting his money is low-interest time deposits.

“It is important in retirement to secure a stable profit much like the monthly paychecks that office workers take home instead of seeking exceptionally large profits [with larger risks],” Yoo said.

Investors have become less aggressive as interest rates remain low, the stock market is stuck in limbo and investment funds lose profits. This is a sharp change from the past, when investors took risks in the stock market or placed lump sums in real estate at every opportunity. In order to compete, banks offered higher interest rates, some of which were in the double digits.

But now, investors are taking it slow and putting their money in products that guarantee stable returns. This includes bonds and insurance products that offer an annual return of at least 3 percent.

The return is higher than the interest on bank deposits, which is 2 percent or lower. Furthermore, investing in insurance has other benefits, such as tax exemption when the subscription exceeds 10 years. Tax exemption has become a key factor in attracting investors.

A study by Woori Bank in September shows the shift in investors’ interests. In a study of clients with assets of more than 1 billion won, insurance made up 20 percent of their total financial portfolio in 2012. As of the end of September this year, the ratio had increased to 28.8 percent. Savings in deposits shrank from 68.6 percent to 58.9 percent over the same period. Insurance policies that help add to the insured person’s wealth, such as deposit-term insurance, are growing the most.

Investors with more than 1 billion won in assets are seen as early adaptors of new trends to expand their wealth. Smaller retail investors follow in their footsteps six months or a year later.

“Wealthy investors are showing interest in insurance policies that they had little interest in the past due to the low-interest return,” said Choi Chul-sik, director at Mirae Asset Investment. “But they are now putting money into financial products that guarantee fixed returns even when it is at 3 percent.”

The trend of less risky investments is also leading to more interest in mid-risk, mid-return investments such as equity-linked securities (ELS) and public offering funds that have an annual return of about 5 percent.

As investors seek stability, investments in equity funds have decreased from a total of 76 trillion won in 2008 to 53 trillion won as of October.

But investment in ELS increased in the third quarter to 20 trillion won, up 46 percent from the previous quarter.

This trend is also reflected in a JoongAng Ilbo survey of 10 financial specialists from banks, securities firms and insurers. Of the 10 specialists, six said ELS products, whose underlying investments are on the stock indices, are a must-have. These products guarantee investors a certain portion of returns if the index stays at a certain level.

Cho Jae-young, a senior manager at Woori Investment and Securities, said it is much safer to invest in indexes than in the stock value of a company or an industry.

The poll also showed that wealthy investors are satisfied even with a 5 percent return. Just two to three years ago, investors were satisfied if they received returns of at least 10 percent. By last year, it had shifted down to 7 or 8 percent.

“Investors’ expectations for big profits has been lowered as the commercial banks’ deposit interest rates are now in the 1 or 2 percent range,” said Lee Young-ah, a manager at Industrial Bank of Korea.

“Wealthy investors in the past were mainly interested in expanding their wealth, but today under the low growth and low-interest rate, they are more focused on securing their wealth,” said Park Seung-an, branch head of one of Woori Bank’s private banking centers.

Kim Sang-hyun, a 77-year-old who retired from running his own business last year, withdrew his investments in a local equity fund to transfer the money to invest in advanced economies including the United States and Europe.

While pursuing index-linked products as a relatively stable investment tool, experts say that people should watch out for funds that seem to be performing well, and should learn lessons from several crises in the past.

Korea has had a long history of investors suffering heavy loss after putting their money into what seemed to be a promising financial product.

One of the first was the Buy Korea Fund created by Hyundai Asset Management in 1999. Korea saw a sudden interest in funds after restructuring during the crisis of the late 1990s.

The Buy Korea Fund attracted huge interest from investors because it appealed to people’s sense of nationalism. Because the Kospi was at its lowest point, there was a consensus that the market could only go up.

In three months of its release in March 1999, the fund attracted 12 trillion won. The first year the fund kept true to its promise with a 77 percent return. But the following year it suffered a 50 percent loss. Today the fund manages 90 billion won and does not attract new investors.

Similar situations have cropped up from time to time since then, including Mirae Asset’s Insight Fund, created in 2007. It was Korea’s first global asset allocation fund and drew a huge crowd, then quickly plummeted during the global crisis in 2008.

These funds proliferated in the local fund market, as financiers constantly created new ones to profit on sales commissions.

While watching out for badly managed funds, investment experts say people should also not choose options that are too safe. Low-risk, low-return products can be the most dangerous.

“People tend to only worry about losing assets if they are chasing high-risk investments, and disregard the possibility of ending up with no money after chasing low-risk, low-return investments,” said Kim Dong-yeop, head of the Mirae Asset Retirement Research Center.

Experts say that all people should start investing instead of keeping their money in a savings account at a bank. They say mid-risk, mid-return products with a return of about 5 percent are best because they are the most reliable and predictable.

“The local investment market is so small and is under strict regulations, so it’s not easy for us to expand the market size [by introducing new types of investment products],” said a CEO from a local investment company who requested anonymity.