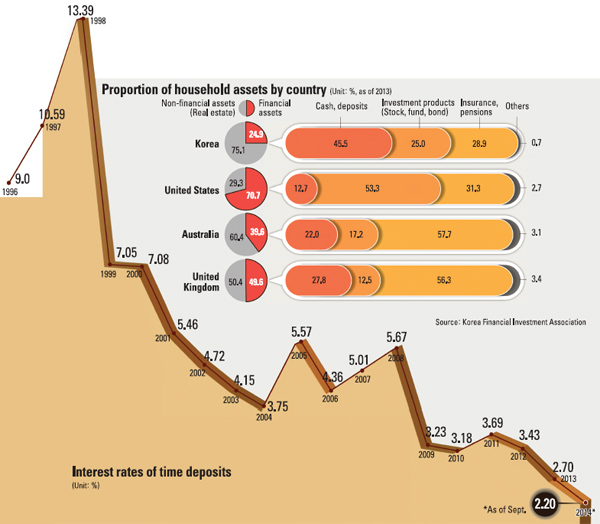 Choi Yoon-seok, 29, who has been working at the same company for less than two years, says he is struggling to build up his assets.

“Because I’m planning my marriage, I thought of opening a one-year time deposit, but that offers only 1.8 percent interest while a two-year offers 1.85 percent,” he complained.

Choi is not alone. Low interest rates on time deposits mean that Koreans can’t save the way they used to.

Until the 1990s, when the average interest rate hovered at around 10 percent, a conventional way to build up assets in Korea was to set aside a portion of wages in the bank every month as a time deposit. With the savings and the interest, people accumulated enough seed money to buy property.

Other local commercial banks are waiting for the right time to lower the rates they offer on time deposits.

Korean consumers will have to live with such low-interest bank savings for a substantial period of time as the country’s central bank is likely to keep its benchmark interest rate in response to the continued quantitative easing of major economies like Japan and the European Union.

Households are alarmed by the low interest rates and are agonizing over the stalling growth of their savings.

But a 35-year-old salaried worker needs to save at least 1.8 million won to ensure that he or she will have the 2.6 million won per month in living costs to last 20 years after an expected retirement age of 60.

For such people, the traditional way of accruing seed money to afford jeonse, or a lump-sum housing rental deposit, on a two-year contract no longer works.

The problem is that there is no replacement system to adopt in the current low-interest environment.

According to the Korea Financial Investment Association, the average proportion of Korean households’ nonfinancial assets stands at 75.1 percent - far higher than that in the United States (29.3 percent) and Japan (39.9 percent).

Among these assets, cash makes up 45.5 percent, which is also higher than in the United States (12.7 percent), the United Kingdom (27.8 percent) and Australia (22 percent).

The Korean capital market is closely regulated by the government and remains too small. Meanwhile, the negative interest rate is also affecting the housing market.

Back in the era of higher interest rates, jeonse was the most common housing contract. For homeowners, a jeonse contract, in which a lump-sum deposit was given to rent a home for two years, was akin to getting a free loan. But as the real interest rate falls below zero, an increasing number of homeowners are switching from jeonse to monthly rentals.

According to government data, the percentage of monthly contracts in the rental market surged to 41.6 percent this year from 32.9 percent in 2011. It’s just a matter of time before monthly rentals start to outstrip jeonse.

Still, most Korean housing finance policies are focused on jeonse.

“Financial products created during the high interest rate period and jeonse-focused housing policies are being questioned,” said Yoo Seung-min, an executive director at Samsung Securities. “If the government fails to convert policies swiftly, there could be huge confusion in the financial and housing markets.”

Both households and corporations are hunting for short-term financial products that offer slightly higher interest rates than time deposits. In frustration, people flock to products that offer just 0.1 percent or 0.2 percent higher rates. They are becoming impatient, largely because of uncertainties at home and abroad because of unpredictable stock prices and foreign exchange rates.

Last week, a VIP customer of Lee Gwan-seok, head of the asset management solutions department at Shinhan Bank, said he would move 500 million won from his Shinhan time deposit account to a different bank that offers a 2.2 percent interest rate.

Lee could barely find a product with a 2.4 percent fixed rate, including a 0.2 percent tax deduction.

“There are not many products that can please such customers with more than 2 percent interest rates,” Lee said. “Some private bankers feel like dying these days.”

Bankers feel that they have no way to deal with the low interest rates. Major commercial banks have stopped providing special offers on high-interest-rate savings products since 2011.

“Even banks don’t know how to manage the deposits when we attract them because the interest rate is low everywhere,” said a head of a commercial bank located in the Seoul metropolitan area.

When products that offer 3 percent interest become available, money that was frozen in the market starts to move. Some savings banks often launch special offers on these savings accounts, which are sought after. Specially offered yuan-denominated deposit accounts have been particularly popular, attracting 4.6 trillion won in August alone.

According to the BOK’s data, as of August there is 557.78 trillion won in short-term deposit accounts - the largest figure yet and an 11 percent rise from a year earlier. Most of the accounts have interest rates of more or less than 1 percent, and their owners face losses because of inflation and taxation.

The percentage of short-term deposits compared to total bank deposits rose to 53.1 percent as of August, the highest since 2011. The figures suggest that many customers are hopping from one short-term deposit account to another, hunting for slightly higher rates.

There are also worries that Koreans will start putting their money into accounts overseas.

“If the current situation continues, some of the domestic savings might flow out of the country [with people] looking for higher yields and market stability,” said Cho Dong-chul, a research fellow at Korea Development Institute.

Analysts say a solution might be to boost the local capital market by using measures such as increasing stock dividends and easing regulations that hinder competition among financial providers.

A popular high dividend fund at Shinyoung Asset Management, the Value High Dividend Fund, has attracted around 3 trillion won. But the average yield of the fund’s portfolio is around 1.8 percent. Similar high dividend funds in other countries have a return of 3 percent.

The reason Korean dividend funds offer lower yields is because the price of company stocks aren’t rising due to high dividends.

When commercial banks offer lower interest rates, money usually flows into the capital market. Many advanced nations that experienced an era of low interest rates earlier than Korea used their stock markets as exit strategy. But the situation here is quite different.

The proportion of cash and deposits in total household assets rose from 45 percent in 2009 to 45.5 percent as of last year, even when the market’s interest rate began to drop. The percentage of stocks dipped from 19.1 percent to 17 percent during the same period.

This is because of a lack of institutional preparation in leading ordinary consumers to the capital market. A symbolic hindrance to this is the absence of dividends. The main reason investors buy stocks is to receive dividends from listed companies.

In the U.S., high dividends serve as an incentive for raising households’ investment in stocks, which helps share prices rise and create a virtuous cycle, boosting the market as a result.

The average dividend return ratio has been in the lower 1 percent range in the last three years in Korea, far lower than Treasury bond yields.

Koreans have recently begun to significantly raise their investment in pension or insurance products instead of stocks, from 24.3 percent in 2009 to 29.8 percent last year.

Market analysts say it is the time to emerge from low-risk, low-return investments and move toward medium risk but medium return with an expected 4 percent to 6 percent interest rate.