Going solar was anything but easy for Luxco

Going solar was anything but easy for Luxco 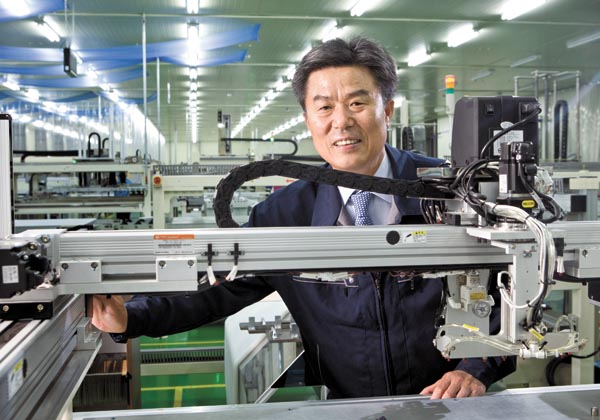 Jeong Yong-hwan, CEO of Luxco, pictured at the company’s factory in Mungyeong, says that solar energy holds the key to future energy needs. By Park Sang-moon

After the solar industry went into a downward spiral in 2011 when economic woes hit Europe, Luxco, the manufacturer based in Mungyeong, South Gyeongsang, saw operation rates at its factory dip to 30 percent.

Having little work to do, employees of the company voluntarily went out into the neighborhood during the day and helped local residents farm onions. Many people in the small town live off onions.

“That made our company one of the favorites in town,” said Jeong Yong-hwan, CEO of Luxco, with a chuckle.

Chuckles aside, it was the biggest crisis the company ever faced. 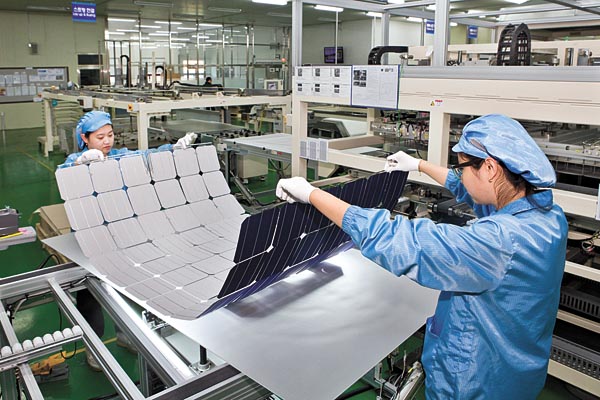 Employees at Luxco work on a solar module at the company’s factory in Mungyeong, North Gyeongsang.By Park Sang-moon

“Demand drastically declined,” Jeong recalled. “But I tried to keep my workers and paid 85 percent of their base salaries, although the employees only worked three hours a day.

“Despite my efforts, some workers quit and moved to other factories because the reduced salary may not have been enough to support a household.”

Luxco, a company with less than 300 workers, managed to weather the tough period thanks to its diversified business structure, committed workers and competitive solar panels.

The solar industry is coming back now as the world economy recovers. Demand for photovoltaic installations is rising in countries like Japan and China, along with emerging economies.

Jeong is determined to make his company more resilient to ups and downs by increasing the competitiveness of its solar modules and looking abroad to supply its products.

“Back then, everything was uncertain, and I was afraid if something went really wrong,” he said.

Jeong took the helm of Luxco in 1998, the peak of the Asian financial crisis. At the time, a number of small and medium-size companies as well as conglomerates went bankrupt or went into court receivership. The government encouraged able businessmen to acquire the stricken companies, and big corporations often acted as middlemen connecting businessmen and companies on the brink of the collapse. Luxco was one of them.

Supplying parts to the shipbuilder helped Luxco enjoy an increase in sales when Jeong first arrived. In 1999, Luxco’s sales were 4.2 billion won ($3.8 million), and the figure had risen to 16 billion won by 2006.

In 2007, Luxco acquired an electronics division to broaden its product lineup.

Jeong always aspired to be more than just an OEM company.

“As the parts business stabilized, I was pretty sure it could generate a decent amount of profit,” he said. “But what I was looking for was something that would make the company’s own brand and technology stand out.”

By the mid-2000s, interest was growing globally in renewable energies.

“I thought that the renewable energy business had good promise for the future because it’s sustainable,” he said.

“I looked through different renewable areas, but solar energy appeared to be the most efficient and promising.”

Luxco built a new factory in Mungyeong to manufacture solar modules in 2008. Looking back, it was a heyday for the renewable energy business, attracting many new players into the area.

By 2011, the economic recession sloshed across the European continent, the biggest consumer of renewable energy sources.

“At the time, European countries accounted for the majority of purchases of renewable energy alternatives,” he said. “But they started cutting back on their spending on alternative energy products.”

Compounding the matter was an oversupply in the face of shrinking demand. The oversupply was led by China’s aggressive and low-cost producers.

“There was a boom both at home and abroad. Many of the smaller companies in Korea also ventured into the business in 2008, but a significant number of them collapsed in 2010 through 2011.”

It was hard to make ends meet, but Jeong decided to go ahead with the photovoltaic business.

“I know there was a lot of hype about solar energy. But that doesn’t necessarily deny the qualities that solar energy offers,” he continued. “It can provide electricity without harming the environment. It is also energy efficient, because advanced technology enables the solar panels to store energy during the day time and use it at night.”

He also cited other business segments of Luxco, which offset the losses generated by photovoltaics.

“Since I had a vision, I didn’t stop investing in research and development.”

He said that he tried to maintain at least 20 researchers to enhance the quality of the panels.

The oversupply issue has now been addressed to some degree, according to Jeong, as many businesses exited the making of solar panels.

Jeong thinks there’s a lot of opportunities for the solar energy industry.

China is now the world’s biggest solar market, and the Chinese government is pushing to install more panels at factories. As it seeks to meet its environmental goals under a historic climate agreement with the United States, there will be likely more demand for renewable energy sources.

Other emerging Asian countries such as Vietnam and Indonesia are also looking for eco-friendly energy resources. In response to growing interest abroad, Luxco opened an office in Vietnam.

“With the launch of the Vietnam office, we are also considering building a power plant in Vietnam.”

The local renewable energy industry is small in size, but it has good prospects with an emission trading system expected to come into force in 2015.

“The big companies can reduce emissions by simply using less electricity. But in the long run, those companies may turn toward renewable energy because it can significantly reduce their emissions,” he said.

But there is growing competition from big companies going into the solar energy business.

“I know big companies are betting big on solar energy,” he said. “But I believe we have our own strengths. We provide more tailored panels to meet the needs of clients. These factors will keep Luxco competitive.”