The concept of the mobile puzzle game is simple: three identical items like carrots or strawberries have to be lined up - and then they disappear. 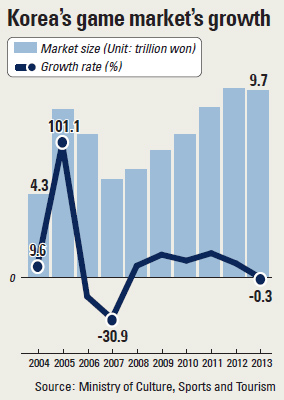 Maybe it’s too simple. That idea is now at the center of a lawsuit brought by a British game developer on a Korean game company.

The lawsuit is raising alarm at Korean game developers.

Lawsuits by foreign game developers on Korean companies are rare. But if the British company wins, it could have a huge impact on the Korean game industry and could prompt additional lawsuits on one of the most popular games in Korea, Anipang 2.

Earlier this year, the popular mobile puzzle game Anipang 2, developed by SundayToz, was accused of copying another game by King.com. Candy Crush Saga by King.com is a worldwide sensation with over 13 million users playing the game on mobile devices.

Both Candy Crush Saga and Anipang 2 solve puzzles in different stages by aligning three identical images similar to that of Forest Mania.

“The two games [Candy Crush Saga and Anipang 2] have very similar components and specific expressions,” a representative of Lee & Ko said. “[King.com] is considering expanding the lawsuit to other games depending on how the first lawsuit turns out.”

Avocado’s lawyer, Koo Tae-eon from Tek & Law, said the idea of matching three identical images isn’t an original concept by King.com. “The idea of the game is not subjected to the protection of intellectual property law,” Koo said. “It’s a common game rule and has been used in other games long before.”

Yet, lawsuits are the last things the local game industry needs. Online game companies are seeing their revenue shrink as more and more customers are shifting from personal computers to mobile games. Meanwhile, the mobile game industry is oversaturated and eating into its own profits.

“The game development industry could be faced with a massive shift depending on how the court rules,” said an industry official who requested anonymity.

Korea is still a powerhouse when it comes to global game market.

Considering the size of its population, Korea’s game industry is particularly active and robust. Korean game companies have shown exceptional strength and competitiveness in online games compared to video games or PC games.

In fact, Korea is the second largest online game market in the world after China with a 21.3 percent market share.

Its contribution to the nation’s economy also commands respect. Among the $1.4 billion in content that was exported overseas in the second quarter, games contributed 62.5 percent - more than music and movies combined.

Game exports also showed the strongest export growth with a 26.1 percent increase year-on-year during the April-June period. This is larger than the export growth of knowledge and information-based content such as information telecommunications services, software, music and entertainment as well as e-commerce. Even cartoon export growth was slower at 17.8 percent.

The Korean game industry has shown exceptional growth since the early 2000s when the government, hoping to turn the country into a leading IT powerhouse, enhanced its networks and Internet infrastructure. Every year it enjoyed growth of 20 percent or more.

But the industry is seeing storm clouds.

First of all, Korean companies have failed to develop a global hit. Today, the most popular online games are developed by foreign companies including League of Legends (LOL), FIFA Online 3 and Diablo 3.

Lately Korean online games have even failed to account for 10 percent of the local gaming market, their own backyard.

Korean online companies are losing ground as people spend less time on their personal computers and more on their mobile devices. Today mobile games are the business to be in. Globally, three out of every four Android smartphone users are estimated to access mobile games.

In Japan, six out of every ten free applications are mobile games.

With so many people accessing mobile games, many believed it to be a blue ocean industry for Korea. However, the situation also came with headwinds. The biggest problem is an excessive inflow of developers into the mobile game space.

Today there are roughly 600 mobile game companies registered since the mobile game market exploded with on the platform of the mobile messenger app company KakaoTalk in the summer of 2012.

But only 48 percent of those companies generate any income from smartphone games. More than half fail to recoup their development costs. There are a large number of companies that even fail to be accepted by KakaoTalk.

Meanwhile mobile game developers are tempted to copy other successful games in order to survive.

In 2012 the mobile game market was 800 billion won and last year it grew to 1 trillion won. This year, it is expected to further expand to 1.3 trillion won.

However, games have a very short cycle compared to online games or video games. So mobile game developers are under pressure to come up with new ideas fast. This tempts many to look at other games that were popular in the past.

Additionally since the life cycles are short, game developers don’t want to place huge investments in a new mobile game.

For online games, companies took between five to 10 years to create a game and used huge amounts of capital. Mobile game development is done faster and cheaper.